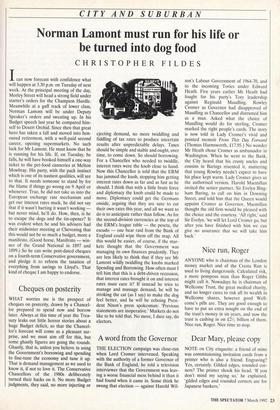 A word from the Governor

THE ELECTION campaign was close-run when Lord Cromer intervened. Speaking with the authority of a former Governor of the Bank of England, he told a television interviewer that the Government was leav- ing a worse financial mess behind it than it had found when it came in. Some think he swung that election — against Harold Wil-

son's Labour Government of 1964-70, and to the incoming Tories under Edward Heath. Five years earlier Mr Heath had fought for his party's Tory leadership against Reginald Maudling. Rowley Cromer as Governor had disapproved of Maudling as Chancellor and distrusted him as a man. Asked what the choice of Maudling would do for sterling, Cromer marked the right people's cards. The story is now told in Lady Cromer's vivid and pointed memoir From This Day Forward (Thomas Harmsworth, f17.95.) No wonder Mr Heath chose Cromer as ambassador in Washington. When he went to the Bank, the City heard that his crusty uncles and cousins in Barings resented it, muttering that young Rowley needn't expect to have his place kept warm. Lady Cromer gives us the authorised version. Harold Macmillan invited the senior partner, Sir Evelyn Bing- ham Baring, to call on him in Downing Street, and told him that the Queen would appoint Cromer as Governor, Macmillan thought the old firm would be pleased with the choice and the courtesy. 'All right,' said Sir Evelyn, 'we will let Lord Cromer go, but after you have finished with him we can give no assurance that we will take him back.'