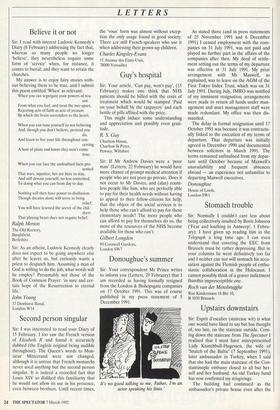 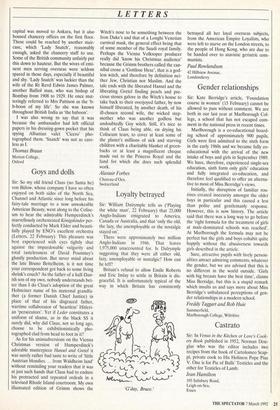 Sir: Esprit d'escalier (staircase wit) is what one would have liked to say but has thought of, too late, on the staircase outside. Com- ing down the staircase from The Spectator I realised that I must have misrepresented Lady Knatchbull-Hugessen, the wife of 'Snatch of the Baltic' (7 September 1991), later ambassador in Turkey, when I said that she had the main staircase of the Con- stantinople embassy closed to all but her- self and her husband. An old Turkey hand has now confirmed my misgivings.

capital was moved to Ankara, but it also housed chancery offices on the first floor. These could be reached by another stair- case, which 'Lady Snatch', reasonably enough, asked the chancery staff to use. Some of the British community unfairly put this down to hauteur. But the wives of emi- nent men serving overseas were seldom spared in those days, especially if beautiful and shy. 'Lady Snatch' was luckier than the wife of the Rt Revd Edwin James Palmer, another Balliol man, who was bishop of Bombay from 1908 to 1929. He once stut- teringly referred to Mrs Pattison as the 'b- b-boon of my life'. So she was known throughout British India as 'the baboon'.

I was also wrong to say that it was because the ambassador had left official papers in his dressing-gown pocket that his spying Albanian valet 'Cicero' pho- tographed them. 'Snatch' was not as care- less as I.