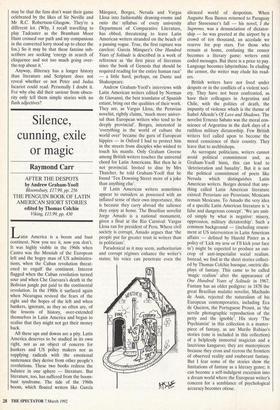 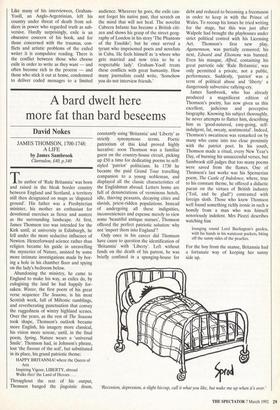 Latin America is a boom and bust continent. Now you see it, now you don't. It was highly visible in the 1960s when Castro was the Messiah of the European left and the bogey man of US administra- tions, when the Cuban revolution threat- ened to engulf the continent. Interest flagged when the Cuban revolution turned sour and when Che Guevara's death in the , Bolivian jungle put paid to the continental revolution. In the 1980s it surfaced again when Nicaragua revived the fears of the right and the hopes of the left and when bankers, ignorant, as they so often are, of the lessons of history, over-extended themselves in Latin America and began to realise that they might not get their money back.

All these ups and downs are a pity. Latin America deserves to be studied in its own right, not as an object of concern for bankers and US policy makers nor as supplying radicals with the emotional sustenance they derive from other people's revolutions. These two books redress the balance in one sphere — literature. But literature, too, has suffered from the boom- bust syndrome. The tide of the 1960s boom, which floated writers like Garcia

Marquez, Borges, Neruda and Vargas Llosa into fashionable drawing-rooms and onto the syllabus of every university Department of Comparative Literature, has ebbed, threatening to leave Latin American writers stranded on the beach of a passing vogue. True, the first rapture was careless: Garcia Marquez's One Hundred Years of Solitude is described in a work of reference as 'the first piece of literature since the book of Genesis that should be required reading for the entire human race' — a little hard, perhaps, on Dante and Shakespeare.

Andrew Graham-Yooll's interviews with Latin American writers edited by Norman de Giovanni, the best translator of Spanish extant, bring out the qualities of their work. They are, as Vargas Llosa, the Peruvian novelist, rightly claims, 'much more univer- sal than European writers who tend to be deeply provincial'. Borges, interested in 'everything in the world of culture the world over' became the guru of European hippies — in Oxford I had to protect him in the streets from disciples who wished to touch his mantle. Only Graham Greene among British writers touches the universal chord for Latin Americans. But then he is not provincial. Invited to dine by Mrs Thatcher, he told Graham-Yooll that he found 'Ten Downing Street more of a joke than anything else'.

If Latin American writers sometimes appear to outsiders as possessed with an inflated sense of their own importance, this is because they carry abroad the salience they enjoy at home. The Brazilian novelist Jorge Amado is a national monument, given a float at the Rio Carnival: Vargas Llosa ran for president of Peru. Where civil society is corrupt, Amado argues that 'the people put far greater trust in writers than in politicians'.

Paradoxical as it may seem, authoritarian and corrupt regimes enhance the writer's status; his voice can penetrate even the

silenced world of despotism. When Augusto Roa Bastos returned to Paraguay after Stroessner's fall — his novel, '/ the Supremo, was a denunciation of dictator- ship — he was greeted at the airport by a crowd of ten thousand, an accolade we reserve for pop stars. For those who remain at home, confusing the censor becomes a literary game: writers emit coded messages. But there is a price to pay. Language becomes labyrinthine. In eluding the censor, the writer may elude his read- ers.

British writers have not lived under despots or in the conflicts of a violent soci- ety. They have not been confronted, as have their colleagues in Argentina and Chile, with the politics of death, the impunity of violence which is the theme of Isabel Allende's Of Love and Shadows. The novelist Ernesto Sabato was the moral con- science of Argentina in the dark days of a ruthless military dictatorship. Few British writers feel called upon to become the moral conscience of their country. They leave that to archbishops.

As surrogate politicians, writers cannot avoid political commitment and, as Graham-Yooll hints, this can lead to 'deterioration and banality'. But it is not the political commitment of poets like Neruda which distinguishes Latin American writers. Borges denied that any- thing called Latin American literature existed: Peruvians are Peruvians; Mexicans remain Mexicans. To Amado the very idea of a specific Latin American literature is 'a false and dangerous concept'. 'We are unit- ed simply by what is negative: misery, oppression, military dictatorship'. Such a common background — (including resent- ment at US intervention in Latin American affairs — defined by Harold Pinter as a policy of 'Lick my arse or I'll kick your face in') might be expected to produce an out- crop of anti-imperialist social realism. Instead, we find in the short stories collect- ed by Thomas Colchie baroque, oneiric dis- plays of fantasy. This came to be called 'magic realism' after the appearance of One Hundred Years of Solitude in 1967. Fantasy has an older pedigree: in 1878 the

great Brazilian mulatto novelist, Machado de Assis, rejected the naturalism of his European contemporaries, including Eca de Queiros, the Portuguese Proust, as 'the servile photographic reproduction of the petty and the ignoble'. His story 'The Psychiatrist' in this collection is a master- piece of fantasy, as are Marilo Rubiao's stories (one is included in this collection) of a helplessly immortal magician and a lascivious kangaroo; they are masterpieces because they cross and recross the frontiers of observed reality and exuberant fantasy. But I fear some of the stories show the limitations of fantasy as a literary genre; it can become a self-indulgent excursion into a dream world where the European writer's concern for a semblance of psychological accuracy becomes otiose. Like many of his interviewees, Graham- Yooll, an Anglo-Argentinian, left his country under threat of death from sol- diers in power who regarded truth as sub- versive. Hardly surprisingly, exile is an obsessive concern of his book, and for those concerned with the traumas, con- flicts and artistic problems of the exiled writer it is compulsive reading. There is the conflict between those who choose exile in order to write as they want — and often become rich in the process — and those who stick it out at home, condemned to deliver coded messages to a limited audience. Wherever he goes, the exile can- not forget his native past, that scratch on the mind that will not heal. The novelist Cabrera Infante has become a British citi- zen and shows his grasp of the street geog- raphy of London in his story 'The Phantom • of the Essoldo'; but he once served a tyrant who imprisoned poets and novelists in Cuba. He feels himself as 'a whore who gets married and now tries to be a respectable lady'. Graham-Yooll treats these conflicts with great humanity. How many journalists could write, 'Somehow you do not interview friends.'