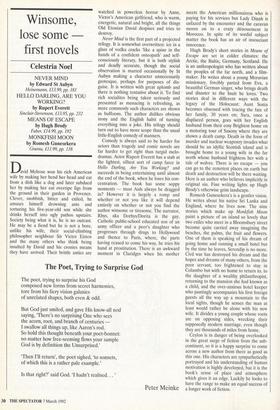 David Melrose won his rich American wife by making her bend her head and eat from a dish like a dog and later subdued her by making her eat overripe figs from the ground in their garden in Provence. Clever, snobbish, bitter and exiled, he amuses himself drowning ants and torturing his five-year-old son while she drinks herself into ugly pathos upstairs. Society being what it is, he is no outcast. He may be a fiend but he is not a bore, unlike his wife, their social-climbing philosopher neighbour Sir Victor Eisten and the many others who think being insulted by David and his cronies means they have arrived. Their brittle antics are

watched in powerless horror by Anne, Victor's American girlfriend, who is warm, energetic, natural and bright, all the things Old Etonian David despises and tries to destroy.

Never Mind is the first part of a projected trilogy. It is somewhat overwritten: ice in a glass of vodka cracks 'like a spine in the hands of a confident osteopath' and self- consciously literary, but it is both stylish and deadly accurate, though the social observation is marred occasionally by St Aubyn making a character unnecessarily grotesque, perhaps for purposes of dis- guise. It is written with great aplomb and there is nothing tentative about it. To find rich socialites being taken seriously and presented as menacing is refreshing, as more commonly such characters are shown as buffoons. The author dislikes obvious irony and the English habit of turning everything into a joke. His trilogy should turn out to have more scope than the usual little-English comedy of manners.

Comedy is always said to be harder for actors than tragedy and comic novels are far harder to get right than turgid melo- dramas. Actor Rupert Everett has a stab at the lightest, silliest sort of camp farce in Hello Darling, Are You Working? and succeeds in being entertaining until almost the end of the book, when he loses his con- centration. The book has some soppy moments — must Aids always be dragged in? However it is largely a romp and whether or not you like it will depend entirely on whether or not you find the author winsome or tiresome. The narrator, Rhys, aka Dorhys/Dorita is the gay, Catholic public-school educated son of an army officer and a peer's daughter who progresses through drugs to Hollywood and thence to Paris, where, the parts having ceased to come his way, he tries his hand at prostitution. There is an awkward moment in Claridges when his mother meets the American millionairess who is paying for his services but Lady Dinah is unfazed by the encounter and the caravan moves on to a crazy denouement in Morocco. In spite of its • sordid subject matter the book has an air of insouciant innocence.

Hugh Brody's short stories in Means of Escape are set in colder climates: the Arctic, the Baltic, Germany, Scotland. He is an anthropologist who has written about the peoples of the far north, and a film- maker. He writes about a young Moravian missionary, forcibly parted from Eva, a beautiful German singer, who brings death and disaster to the Inuit he loves. Two stories deal in different ways with the legacy of the Holocaust: Aunt Sonia becomes obsessed with tracing the fate of her family, 30 years on; Sara, once a displaced person, goes with her English husband from their cosy Brighton home on a motoring tour of Saxony where they are shown a death camp. Death in the form of murder and nuclear weaponry invades what should be an idyllic Scottish island and is brought home to a young wife in the far north whose husband frightens her with a tale of wolves. There is no escape — you can go to the remotest places on earth but death and destruction will be there waiting. Here is an author who believes implicitly in original sin. Fine writing lights up Hugh Brody's otherwise grim landscape.

Romesh Gunesekera's is a gentler vision. He writes about his native Sri Lanka and England, where he lives now. The nine stories which make up Monkfish Moon paint a picture of an island so lovely that two exiles who meet in a Bloomsbury street become quite carried away imagining the beaches, the palms, the fruit and flowers. One of them is speaking of his dream of going home and running a small hotel but by the time he leaves, Serendip is no more. Civil war has destroyed his dream and the hopes and dreams of many others, from the poor servant, too frightened to stay in Columbo but with no home to return to, to the daughter of a wealthy philanthropist, returning to the mansion she had known as a child, and the over-anxious hotel keeper who pantingly accompanies his first foreign guests all the way up a mountain to the local sights, though he senses the man at least would rather be alone with his new wife. It divides a young couple whose roots are on opposing sides, wrecking their supposedly modern marriage, even though they are thousands of miles from home.

Ceylon is in danger of being overlooked in the great surge of fiction from the sub- continent, so it is a happy surprise to come across a new author from there as good as this one. His characters are sympathetically portrayed and his understanding of human motivation is highly developed, but it is the book's sense of place and atmosphere which gives it an edge. Luckily he looks to have the range to make an equal success of a longer work of fiction.