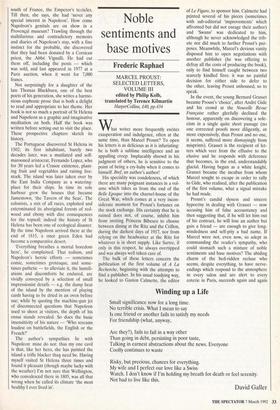 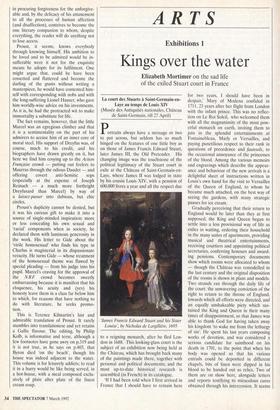 Noble sentiments and base motives

at writer more frequently excites Wh exasperation and indulgence, often at the same time, than Marcel Proust? To open his letters is as delicious as it is infuriating: he is both a sublime intelligence and an appalling creep. Implacably shrewd in his judgment of others, he is sensitive to the point of being a cry-baby when it comes to himself. Bref, an author's author!

His speciality was condolences, of which there are many poignant instances in a vol- ume which takes us from the end of the Belle Epoque into the charnel-house of the Great War, which comes at a very incon- siderate moment for Proust's fortunes on the stock exchange. His certainty that he is ruined does not, of course, inhibit him from inviting Princess Bibesco to choose between dining at the Ritz and the Crillon, during the darkest days of 1917, nor from relying on the headwaiter at the Ritz for whatever is in short supply. Like Sartre, if only in this respect, he always overtipped and was always well taken care of.

The bulk of these letters concern the publication of the first volume of A La Recherche, beginning with the attempts to find a publisher. In his usual toadying way, he looked to Gaston Calmette, the editor of Le Figam, to sponsor him. Calmette had printed several of his pieces (sometimes with sub-editorial 'improvements' which affronted but did not enrage their author) and 'Swann' was dedicated to him, although he never acknowledged the trib- ute nor did much to further Proust's pur- poses. Meanwhile, Marcel's devious vanity disposed him to open negotiations with another publisher (he was offering to defray all the costs of producing the book), only to find himself caught between two scarcely kindled fires: it was no painful decision for either side to defer to the other, leaving Proust unhoused, so to speak.

In the event, the young Bernard Grasset became Proust's 'choice', after Andre Gide and his crowd at the Nouvelle Revue Francaise rather gleefully declined the honour, apparently on discovering a sole- cism in a single quite short passage (no one corrected proofs more diligently, or more expensively, than Proust and no one, it seems, suffered more dismayingly from misprints). Grasset is the recipient of let- ters which veer from the effusive to the elusive and he responds with deference that becomes, in the end, understandably glacial. Having begun as a white knight, Grasset became the incubus from whom Marcel sought to escape in order to rally to Gide, who realised, after the publication of the first volume, what a signal mistake he had made.

Proust's candid slyness and sincere hypocrisy in dealing with Grasset — now accusing him of false accountancy and then suggesting that, if he will let him out of his contract, he will lose an author but gain a friend — are enough to give long- windedness and self-pity a bad name. If Marcel were not, even now, so adept in commanding the reader's sympathy, who could stomach such a mixture of noble sentiments and base motives? The abiding charm of the bed-ridden recluse who seems, despite everything, to have nerve- endings which respond to the atmosphere in every salon and are alert to every coterie in Paris, succeeds again and again

in procuring forgiveness for the unforgive- able and, by the delicacy of his attunement to all the processes of human affection (and disaffection), contrives to become the one literary companion to whom, despite everything, the reader will do anything not to lose access.

Proust, it seems, knows everybody through knowing himself. His ambition to be loved and to be admired would be in- sufferable were it not for the exquisite means he adopts for its fulfilment. One might argue that, could he have been cossetted and flattered and become the darling of the gratin without writing a masterpiece, he would have contented him- self with corresponding with nobs and with the long-suffering Lionel Hauser, who gave him worldly-wise advice on his investments. As it is, he had the protracted wit to make immortality a substitute for life.

The fact remains, however, that the little Marcel was an egregious climber and that it is a sentimentality on the part of his admirers to accuse him of an inner core of moral steel. His support of Dreyfus was, of course, much to his credit, and his biographers have drawn greatly on it, but here we find him cosying up to the Action Francaise crowd — putting out feelers to Maurras through the odious Daudet — and offering covert anti-Semitic sops (especially at the expense of Joseph Reinach — a much more forthright Dreyfusard than Marcel) by way of a laissez-passer into dubious, but chic circles.

Proust's duplicity cannot be denied, but it was his curious gift to make it into a source of single-minded inspiration; more or less concealing his own sexual and 'racial' components when in society, he declared them with luminous generosity in the work. His letter to Gide about the 'virile homosexual' who finds his type in Charlus is magisterial in its dispassionate veracity. He turns Gide — whose treatment of the homosexual theme was flawed by special pleading — from his judge into his pupil. Marcel's craving for the approval of the N R F crowd becomes sweetly embarrassing because it is manifest that his eloquence, his acuity and (yes) his honesty leave them in a class far below him to which, for reasons that have nothing to do with literature, he seeks promo- tion.

This is Terence Kilmartin's last and admirable translation of Proust. It rarely stumbles into translationese and yet retains a Gallic flavour. The editing, by Philip Kolb, is informative and terse, although a few footnotes have gone awry on p.319 and it is not true, as he says on p.403, that Byron died 'on the beach', though his house was indeed adjacent to the water. This volume is for leisurely addicts; to read it in a hurry would be like being served, in a hot-house, with a meal composed exclu- sively of plate after plate of the finest cream soup.