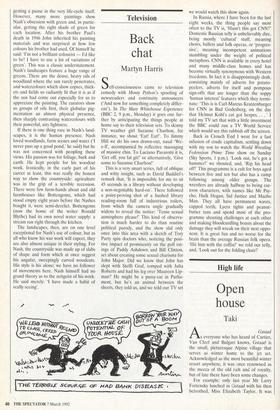 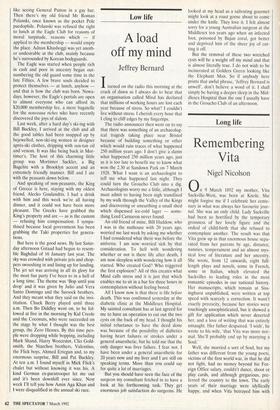 AGstaad s everyone who has heard of Cartier, Van Cleef and Bulgari knows, Gstaad is the small, picturesque Alpine village that serves as winter home to the jet set. Acknowledged as the most beautiful winter resort anywhere, it was once renowned as the mecca of the old rich and of royalty, but of late there have been some changes.

For example: only last year Mr Larry Fortensky lunched in Gstaad with his then betrothed, Miss Elizabeth Taylor. It was like seeing General Patton in a gay bar. Then there's my old friend Mr Roman Polanski, once known as the pocket Pole paedophile. Polanski was refused the right to lunch at the Eagle Club for reasons of moral turpitude, reasons which — if applied to the membership — would empty the place. Adnan Khashoggi was yet anoth- er undesirable at the club, mainly because he's surrounded by Korean bodyguards.

The Eagle was started when people rich in cash and poor in ancestry began out- numbering the old guard some time in the late Fifties. A few brave souls decided to protect themselves — at lunch, anyhow — and that is how the club was born. Nowa- days, however, the Eagle's portals are open to almost everyone who can afford its

$20,000 membership fee, a mere bagatelle for the nouveaux riches who have recently discovered the joys of slalom.

Last week, after a hard day's ski-ing with Bill Buckley, I arrived at the club and all the good tables had been snapped up by bejewelled, non-ski-ing women in designer apres-ski clothes, dripping with sun-tan oil and venom. It was like being back in Mor- timer's. The host of this charming little group was Mortimer Sackler, a Big Bagelite with a Brooklyn accent and an extremely friendly manner. Bill and I ate with the peasants down below.

And speaking of non-peasants, the King of Greece is here, staying with my oldest friend, Alecko Goulandris. I had a drink with him and this week we're all having dinner, and it could not have been more pleasant. The Greeks have grabbed the

King's property and are — as is the custom — refusing. him compensation. I sympa-

thised because local government has been grabbing the Taki properties •for genera- tions.

But here is the good news. By last Satur- day afternoon Gstaad had begun to resem- ble Baghdad of 16 January last year. The sky was crowded with private jets and chop- pers swooshing in and lining up for landing.

The jet set was arriving in all its glory for the most fun party I've been to in a hell of a long time. The theme was 'Bop until you drop' and it was given by Julio and Vera Santo Domingo and the Sursock brothers. And they meant what they said on the invi- titation. Chuck Berry played until three a.m. Then Bo Diddley went on, to be fol- lowed at five in the morning by Kid Creole and the Coconuts, who were succeeded on the stage by what I thought was the best group, the Zero Heroes. By this time peo- ple were dropping while bopping, including Mark Shand, Harry Worcester, Clio Gold- smith, the Niarchos brothers, Valentino, the Flick boys, Ahmed Ertegun and, to my enormous surprise, Bill and Pat Buckley. At ten a.m. I found myself in Mick Flick's chalet but without knowing it was his. A kind German ex-paratrooper let me out and it's been downhill ever since. Next week I'll tell you how Amin Aga Khan and I were disqualified in the annual ski race.