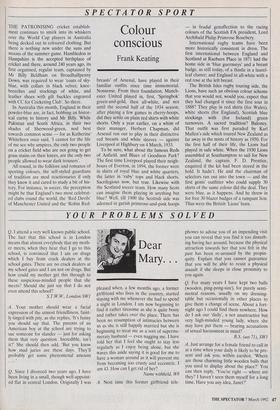 Q. I attend a very well known public school. The fact that this school is in London means that almost everybody that my moth- er meets, when they hear that I go to this school, is convinced that I am on drugs which I buy from crack dealers at the school gates. There are no crack dealers at my school gates and I am not on drugs. But how could my mother get this through to these suspicious-minded people that she meets? Should she just say that I do not even attend this school'?

S.T.W.W., London SW1 A. Your mother should wear a facial expression of the utmost friendliness, faint- ly tinged with pity, as she replies, 'It's funny you should say that. The parents of an American boy at the school are trying to sue someone for slander — just for asking them that very question. Incredible, isn't it?' She should then add, 'But you know how mad juries are these days. They'll probably get some phenomenal amount Q. Since I divorced two years ago, I have been living in a small, though well-appoint- ed flat in central London. Originally I was

pleased when, a few months ago, a former girlfriend who lives in the country, started staying with me whenever she had to spend a night in London. I am now beginning to find it rather tiresome as she is quite bossy and rather takes over the place. There has been no resumption of intimacies between us as she is still happily married but she is beginning to treat me as a sort of supernu- merary husband — even nagging me. I have told her that I feel she ought to stay less regularly as I enjoy being alone, but she waves this aside saying it is good for me to have a woman around as it will prevent me from becoming too crusty and eccentric. I am 43. How can I get rid of her?

Name withheld, W8 A. Next time this former girlfriend tele-

phones to advise you of an impending visit you can reveal that you find it too disturb- ing having her around, because the physical attraction towards her that you felt in the past has been re-aroused by the propin- quity. Explain that you cannot guarantee that you will be able to resist a physical assault if she sleeps in close proximity to you again.

Q. For many years I have kept two balls (wooden, ping-pong-size), for purely senti- mental reasons, usually on my dressing- table but occasionally in other places to give them a change of scene. About a fort- night ago I could find them nowhere. How do I ask our 'daily', a not unattractive but very high-minded young lady, where she may have put them — bearing accusations of sexual harassment in mind?

B.S. (act 71), SW) A. Just arrange for a female friend to call in at a time when your daily is likely to be pre- sent and ask you, within earshot, 'Where are those charming little wooden balls that you used to display about the place?' You can then reply, 'You're right — where are they? I haven't seen them myself for a long time. Have you any idea, Janet?'