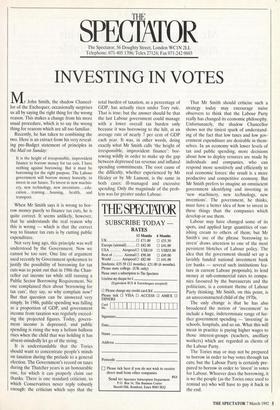 Mr John Smith, the shadow Chancel- lor of the Exchequer, occasionally surprises us all by saying the right thing for the wrong reason. This makes a change from his more usual procedure, which is to say the wrong thing for reasons which are all too familiar.

Recently, he has taken to combining the two. Here is an extract from his very reveal- ing pre-Budget statement of principles in the Mail on Sunday: It is the height of irresponsible, improvident finance to borrow money for tax cuts. I have nothing against borrowing. But it must be borrowing for the right purpose. The Labour government will borrow money honestly, to invest in our future. To invest in new machin- ery, new technology, new inventions...edu-

Not very long ago, this principle was well understood by the Government. Now we cannot be too sure. One line of argument used recently by Government spokesmen to justify the possibility of borrowing for tax cuts was to point out that in 1986 the Chan- cellor cut income tax while still running a Public Sector Borrowing Requirement. No one complained then about 'borrowing for tax cuts', they say, so why complain now? But that question can be answered very simply. In 1986, public spending was falling as a proportion of GDP, and government income from taxation was regularly exceed- ing the projected figures. Today, govern- ment income is depressed, and public spending is rising the way a helium balloon rises when the child that was holding it has absent-mindedly let go of the string.

It is understandable that the Tories should want to concentrate people's minds on taxation during the prelude to a general election. The Government's record on taxes during the Thatcher years is an honourable one, for which it can properly claim our thanks. There is one standard criticism, to which Conservatives never reply robustly enough: the criticism which says that the

total burden of taxation, as a percentage of GDP, has actually risen under Tory rule. That is true; but the answer should be that the last labour government could manage with a lower overall tax burden only because it was borrowing to the hilt, at an average rate of nearly 7 per cent of GDP each year. It was, in other words, doing exactly what Mr Smith calls `the height of irresponsible, improvident finance': bor- rowing wildly in order to make up the gap between depressed tax revenue and inflated spending commitments. The root cause of the difficulty, whether experienced by Mr Healey or by Mr Lamont, is the same in both cases: ill-managed and excessive spending. Only the magnitude of the prob- lem was far greater under Labour.

That Mr Smith should criticise such a strategy today may encourage naive observers to think that the Labour Party really has changed its economic philosophy. Unfortunately, the shadow Chancellor shows not the tiniest spark of understand- ing of the fact that low taxes and low gov- ernment expenditure are desirable in them- selves. In an economy with lower levels of tax and public spending, more decisions about how to deploy resurces are made by individuals and companies, who can respond more sensitively and efficiently to real economic forces: the result is a more productive and competitive economy. But Mr Smith prefers to imagine an omniscient government identifying and investing in 'new machinery, new technology, new inventions'. The government, he thinks,

must have a better idea of how to invest in these things than the companies which develop or use them.

Labour may have changed some of its spots, and applied large quantities of van- ishing cream to others of them; but Mr Smith's use of the phrase 'borrowing to invest' draws attention to one of the most persistent blotches of Labour policy. The

idea that the government should set up a lavishly funded national investment bank (or banks — several such institutions fea- ture in current Labour proposals), to lend money at sub-commercial rates to compa-

nies favoured by the bureaucrats and the politicians, is a constant theme of Labour Party thinking. Mr Smith, on this point, is an unreconstructed child of the 1970s.

The only change is that he has also broadened the notion of 'investment' to include a huge, indeterminate range of fur- ther government spending — 'investing' in schools, hospitals, and so on. What this will mean in practice is paying higher wages to those interest-groups (teachers, ancillary workers) which are regarded as clients of the Labour Party.

cuts; but the Labour Party is certainly pre-

pared to borrow in order to 'invest' in votes for Labour. Whoever does the borrowing, it

is we the people (as the Tories once used to remind us) who will have to pay it back in the end.