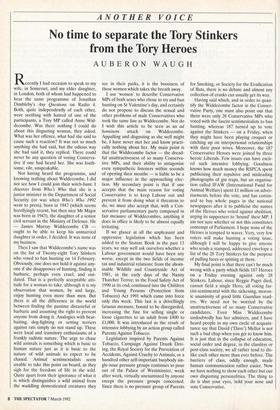 No time to separate the Tory Stinkers from the Tory Heroes

Not having heard the programme, and knowing nothing about Widdecombe, I did not see how I could join their witch-hunt. I discover from Who's Who that she is a junior minister in the Department of Social Security (or was when Who's Who 1992 went to press), born in 1947 (which seems horrifyingly recent, but then nice Mr Major was born in 1943), the daughter of a senior civil servant in the Ministry of Defence. He — James Murray Widdecombe CB — ought to be able to keep his unmarried daughter in order, I decided. It was none of my business.

Then I saw that Widdecombe's name was on the list of Twenty-eight Tory Stinkers who voted to ban hunting on 14 February. Obviously, one does not hold it against any- one if she disapproves of hunting, finding it barbaric, perhaps even cruel, and out- dated. That is a perfectly acceptable atti- tude for a woman to take, although it is my observation that women, by and large, enjoy hunting even more than men. But there is all the difference in the world between finding the pastime distasteful or barbaric and assuming the right to prevent anyone from doing it. Analogies with bear- baiting, dog-fighting or setting terriers against rats simply do not stand up. These were local and transitory enthusiasms of a frankly sadistic nature. The urge to chase wild animals is something which is basic to human nature just as it is basic to the nature of wild animals to expect to be chased. Animal sentimentalists seem unable to take this point on board, as they sigh for the freedom of life in the wild. Quite apart from their ignorance of what it is which distinguishes a wild animal from the waddling domesticated creatures they see in their parks, it is the bossiness of these women which takes the breath away.

I use 'women' to describe Conservative MPs of both sexes who chose to try and ban hunting on St Valentine's day, and certainly do not propose to discuss the sexual and other problems of male Conservatives who took the same line as Widdecombe. Nor do I wish this article to be seen as an ad hominem attack on Widdecombe. Appalling and disgusting as she well might be, I have never met her and know practi- cally nothing about her. My main point is that the Widdecombe factor — the dread- ful unattractiveness of so many Conserva- tive MPs, and their ability to antagonise even sympathetic listeners within seconds of opening their mouths — is liable to be a major influence in the approaching elec- tion. My secondary point is that if one accepts that the main reason for voting Conservative is to keep Labour out and prevent it from doing what it threatens to do, we must also accept that, with a Con- servative parliamentary party composed in fair measure of Widdecombes, anything it does in office is likely to be almost equally irritating.

If we glance at all the unpleasant and oppressive legislation which has been added to the Statute Book in the past 13 years, we may well ask ourselves whether a Labour government would have been any worse, except in the two fields of income tax and industrial relations: from the abom- inable Wildlife and Countryside Act of 1981, in the early days of the Nanny Thatcher Terror, to the Food Safety Act of 1990 at its end, continued into the Children and Young Persons (Protection from Tobacco) Act 1991 which came into force only this week. This last is a drivellingly fatuous measure, bound to be disregarded, increasing the fine for selling single or loose cigarettes to an adult from £400 to £1,000. It was introduced as the result of intensive lobbying by an action group called Parents Against Tobacco.

Legislation inspired by Parents Against Tobacco, Campaign Against Drunk Driv- ing, the Royal Society for the Prevention of Accidents, Against Cruelty to Animals, or a hundred other self-important busybody sin- gle-issue pressure groups continues to pour out of the Palace of Westminster, week after week, virtually unexamined by anyone except the pressure groups concerned. Since there is no pressure group of Parents for Smoking, or Society for the Eradication of Bats, there is no debate and almost any collection of cranks can usually get its way.

Having said which, and in order to quan- tify the Widdecombe factor in the Conser- vative Party, one must also point out that there were only 28 Conservative MPs who voted with the fascist sentimentalists to ban hunting, whereas 187 turned up to vote against the Stinkers — on a Friday, when they might have been playing croquet or catching up on interpersonal relationships with their poor wives. Moreover, the 187 Conservative Heroes were joined by three heroic Liberals. Few issues can have excit- ed such intensive lobbying. Goodness knows how much money the RSPCA spent publicising their repulsive and misleading photographs of gin traps, but an organisa- tion called IFAW (International Fund for Animal Welfare) spent £1 million on adver- tisements before the vote, and has contin- ued to buy whole pages in the national newspapers after it to publicise the names of the Heroes who voted against abolition, urging its supporters to 'hound' their MP. I am not sure whether or not this constitutes contempt of Parliament. I hope none of the Heroes is tempted to waver. Very, very few voters will make hunting a voting issue, although I will be happy to give anyone who sends a stamped, addressed envelope a list of the 28 Tory Stinkers for the purpose of pulling faces or spitting at them.

My final point is that there can't be much wrong with a party which fields 187 Heroes on a Friday evening against only 28 Stinkers. Labour, since Reggie Paget died, cannot field a single Hero, all voting fas- cist-sentimental with the sickening, moron- ic unanimity of good little Guardian read- ers. We need not be worried by the unattractiveness of so many Conservative candidates. Even Miss Widdecombe undoubtedly has her admirers, and I have heard people in my own circle of acquain- tance say that David ('Dave') Mellor is not such a bad chap when you get to know him. It is just that in the collapse of education, social order and degree, in the classless or post-class society, we all rather tend to dis- like each other more than ever before. The barriers of class, oddly enough, made human communication rather easier. Now we have nothing to show each other but our own disgusting personalities. The thing to do is shut your eyes, hold your nose and vote Conservative.