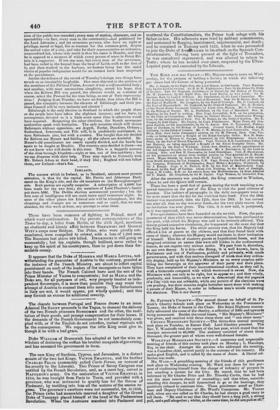 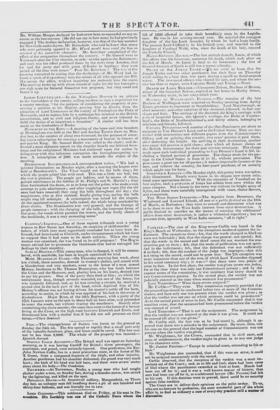 trick's Charity Schools took place on Wednesday at the Freemason's Tavern, the Duke of Sussex in the Chair. His Royal Highness success- fully advocated the cause of the charity, a collection of 3401. and upwards being announced. Besides the usual toasts, " His Majesty's Ministers" was given, and received with three times three and " one cheer more." CHURCI1 MISSIONARY SOCIETY.—The thirty-first annual meeting took place on Tuesday, at Exeter Hall. Lord Gambier presided. The Rev. T. Woodroffe read the report of the last year, which stated that the receipts amounted to 46,0004 The auditory consisted of about three thousand, the greater part of whom were well-dressed females.

WESLEYAN MISSIONARY SocIETY.—A numerous and respectable meeting of friends of this society took place on Monday ; L. Hanslope, Esq. in the chair. Amongst the persons who addressed the meeting, was a Canadian chief, attired partly in the costume of his country. He spoke good English, and is called by the name of Jones. A liberal col- lection was made.

Mn. WARD.—A grumbling meeting of the friends of this gentleman took place on Wednesday evening. Mr. Ward met them for the pur- pose of vindicating himself from the charge of infirmity of purpose in not standing a contest for the City. He stated, that he had been informed by Sir Charles Price and Mr. Timothy Curtis, that he had not the most remote chance of succeeding; and that when, notwith- standing this damper, he still determined to go to the hustings, they positively refused to nominate him. These gentlemen seta as- Chair- man and Deputy Chairman of Mr. Ward's Committee. Mr. Turner said, when any one called on Sir Charles, he had always a good story to tell them. " He used to say that they should have a long pull, a strong pull, and a pull altogether; whilst, at the same time, hi did not pull at all.' Mr. 'William Morgan declared he had never been so successful on any oc- casion as the late canvass. [ He did not say in how many he had previously engaged. ] The drollest declaration, however, was that of the late member for Newcastle-under-Lyme, Mr. Borrodaihe, who said he knew that many who were politically opposed to Mr. Ward would have voted for hinz on account of his consistent character. Mr. Kerschaw complained of the effect of the resignation throughout the country. " He himself went to Yarmouth after the City election, in orde. to vote against the Reformers ; and such was the effect produced there by the news from London, that &e and his party met with great di ificulty in landing ; they were pelted all the time with stones " Poor :II r. Kerschaw ! The rest of' the meeting concurred in stating that the declinature of Mr. Ward had in- fused a spirit of despondency into the minds of all. who opposed the Bill. :«'e accept the effect, without inquiring too curiously into the cause. The meeting broke up with three rounds of sighs for the lust boroughs ; one sigh more for General Gascoyne was proposed, but they could not heave it up.