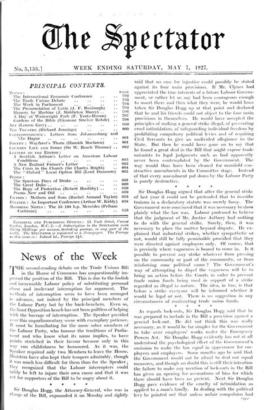 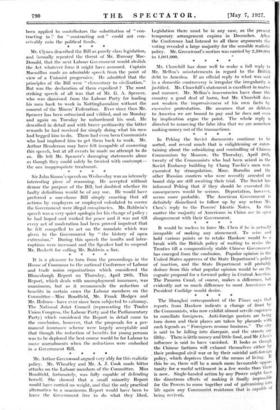 As regards lock-outs, Sir Douglas Hogg said that he was

prepared to include in the Bill a provision against a general lock-out. He did not think this was really necessary, as it would be far simpler for the Government to take over employers' works under the Emergency Powers Act. Sir Douglas Hogg evidently has not at all understood the psychological effect of the Government's omission to make the law equal in appearance for em- ployees and employers. Some months ago he said that the Government would not be afraid to deal out equal measures, and though no doubt this is still their intention the failure to make any mention of lock-outs in the Bill has given an opening for accusations of bias for which there should have been no pretext. Next Sir Douglas Hogg gave evidence of the cruelty of intimidation as applied to a man's family. In dealing with the political levy he pointed out that unless unfair compulsion had been applied to contributors the substitution of " con- tracting in for "-contracting out " •could not con- ceivably ruin the political funds. • * * *