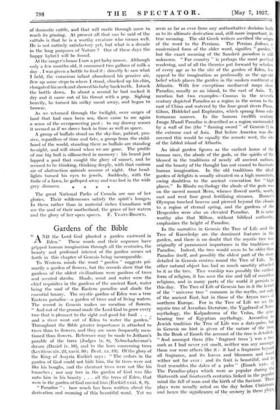 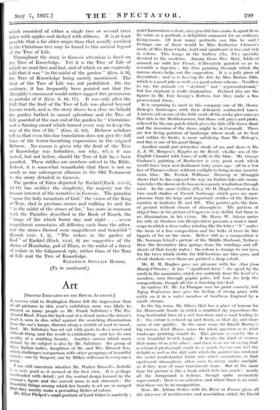 Gardens of the Bible

"AND the Lord God planted a garden eastward in Eden." These words and their sequence have gripped human imagination through all the centuries, the beauty and profound interest of the garden scenes set forth in this chapter of Genesis being incomparable.

To Western minds the word " garden " suggests pri- marily a garden of flowers, but the records show that the gardens of the oldest civilizations were gardens of trees and scented shrubs. Shade, scent and water were the chief requisites in the gardens of the ancient East, water being the soul of the Eastern paradise and shade the essential luxury. The mystic garden of Eden was a true Eastern paradise—a garden of trees and of living waters. The record in Genesis makes no mention of flowers. " And out of the ground made the Lord God to grow every tree that is pleasant. to the sight and good for food . . and a river went out of Eden to water the garden." Throughout the Bible greater importance is attached to trees than to flowers, and they are more frequently men- tioned than flowers. Reference may be made to Jotham's parable of the trees (Judges ix. 8), Nebuchadicezzar's dream (Daniel iv. 10), and to the laws concerning trees (Leviticus xix. 23, xxvii. 30 ; Deut. xx. 19). Of the glory of the King of Assyria Ezekiei says " The. cedars in the garden of God could not hide him, the fir trees were not like his boughs, and the chestnut trees were not like his branches ; nor any tree in the garden of God was like unto him in his beauty . . . all the trees of Eden, that were in the garden of God. envied him (Ezekiel xxxi. 8, 9).

" Paradise " : how much has been written about the derivation and meaning of this beautiful_ word. Yet, we seem as far as ever from any authoritative decision both as to its ultimate derivation and, still more important, its true meaning. The old Greek writers ascribed the origin of the word to the Persians. The Persian firdaus, a modernized form of the older word, signifies " garden," but the exact meaning of the Sanskrit paradeca is still unknown. " Far country." is perhaps the most poetical rendering, and of all the theories put forward by scholars of every age as to the site of the garden of Eden, few appeal to the imagination as profoundly as the age-old belief which places the garden in the sunken continent of Atlantis. With few exceptions mediaeval maps show Paradise, usually as an island, to the east of Asia. To mention but two examples—Cosmas in the seventh century depicted Paradise as a region in the ocean to the east of China and watered by the four great rivers Pison, Gihon, Hiddekel and Euphrates, which sprang from sub- terranean sources. In the famous twelfth century Imago Mundi Paradise is described as a region surrounded by a wall of fire (the " flaming sword " of Genesis ?) in the extreme east of Asia. But before America was dis- covered this would be equally the remote west, the site of the fabled island of Atlantis.

An ideal garden figures as the earliest home of the human race, the abode of the gods, or the spirits of the blessed in the traditions of nearly all ancient nations, and the beauty of the thought has not ceased to fascinate human imagination. In the old traditions the ideal garden of delights is usually situated on a high mountain, owing doubtless to the ancient veneration for " high places." In Hindu mythology the abode of the gods was on the sacred mount Meru, whence flowed north, south, east and west four great fertilizing streams. Homer's Olympus touched heaven and pierced beyond the clouds to a region of eternal spring, and the gardens of the Hesperides were also an elevated Paradise. kis note- worthy also that Milton, without biblical authority, emphasizes the height of Paradise.

In the narrative in Genesis the Tree of Life and the Tree of Knowledge are the dominant features in the garden, and there is no doubt that the mystic tree was originally of paramount importance in the traditions of Paradise. Indeed, the tree would seem to be older than Paradise itself, and possibly the oldest part of the story detailed in Genesis centres round the Tree of Life. No other natural object has had so much sanctity attached to it as the tree. Tree worship was possibly the earliest form of religion, it has seen the rise and fall of countless religions, and in many parts of the world it persists to this day. The Tree of Life of Genesis has in it the kernel of the " universe tree " common in the myths, not only of the ancient East, but in those of the Aryan races of northern Europe. For in the Tree of Life we see the mystic tree of Accadian literatUre, the Yggdrasil of Norse mythology, the Kalpadruma of the, Vedas, the gem' bearing tree of Egyptian mythology. According to Jewish tradition the Tree of Life was a date-palm, but in Genesis no hint is given of the nature of the tree. In the Book of Enoch the account of the tree is detailed: " And amongst them (the ' fragrant trees ') was a tree such as I had never yet smelt, neither was any amongst them nor were others like it : it had a fragrance beyond all fragrance, and its leaves and blossoms and WWI wither not for ever : . and its fruit is beautiful, and its fruit resembles the dates of a palm " (Enoch xxiv. 4) The Paradise-plays which were so popular during ti e thirteenth and fourteenth centuries linked in the popular mind the fall of man and the birth of the Saviour. These plays were usually acted on the day before Christmas, and hence the siunificance of the scenery in these plays, which consisted of either a single tree or several trees laden with apples and decked with ribbons. It is at least possible that a far older origin than that usually ascribed to the Christmas tree may be found in this ancient legend of the Tree of Life.

Thc garden of Eden depicted by Ezekiel (Ezek. xxvii;„ 13-17) has neither the simplicity, the majesty nor the human interest of the narrative in Genesis. The paradise " upon the holy mountain of God," the vision of the King of Tyre, clad in precious stones and walking to and fro " in the midst of the stones of fire," has more in common with the Paradise described in the Book of Enoch, the " range of fire which burnt clay and night . . . seven magnificent mountains all differing each from the other, and the stones thereof were magnificent and beautiful" (Enoch xxiv. 1, 2). " The cedars in the garden of God " of Ezekiel (Ezek. xxxi. 8) are suggestive of the shrine of Humbaba, god of Elam, in the midst of a forest of cedars in the Gilgamesh epic, rather than of the Tree of Life and the Tree of Knowledge.