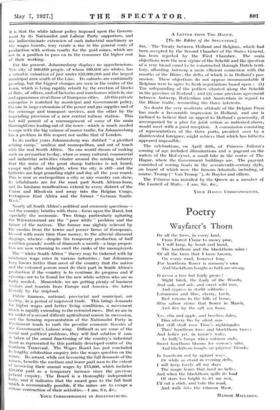 A LEITER FROM THE HAGUE.

- [To the Editor of the SPECTATOR.] SIR,—The Treaty between Holland and Belgium, which had been accepted by the Second Chamber of the States General, has been rejected by the First Chamber. The main objections were the new regime of the Scheldt and the question of a very broad canal to be constructed through Dutch terri- tory, affording Antwerp a more efficient connexion with the mouths of the Rhine, the delta of which is in Holland's pos- session. These objections do not appear insurmountable it Belgium were to agree to fresh negotiations based upon :—(1) The safeguarding of the polders situated along the Scheldt in the province of Zealand ; and (2) some previous agreement between Antwerp, Rotterdam and Amsterdam in regard to the Rhine traffic, reconciling the three interests.

No doubt the very moderate attitude of the Belgian Press has made a favourable impression in Holland, and one is inclined to believe that an appeal to Holland's generosity, if accompanied by a plan for joint action as indicated above, would meet with a good reception. A commission consisting of representatives of the three ports, presided over by a disinterested foreigner, might achieve that which has hitherto appeared impossible.

The celebrations, on April 30th, of Princess Juliana's coming of age included illuminations and a pageant on the waters of the Hof-vyver, a small lake in the centre of The Hague, where the Government buildings are. The pageant consisted of rowing boats in the seventeenth-century style, on board of which were the famous Admirals, including, of course, Tromp (" Van Tromp "), de Ruyter and others.

The Princess was installed by the Queen as a member of the Council of State.—I am, Sir, &c.,