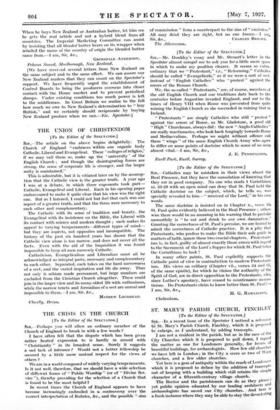 THE CRISIS IN THE CHURCH

[To the Editor .of the SPECTATOR.] SIR,—Perhaps you will allow an ordinary member of the Church of England to break in with a few words ?

I have often felt that the dispute which has been given rather heated expression to is hardly in accord with " Christianity " in its broadest sense. Surely it suggests a sad lack of tolerance ? Would not a better fellowship be secured by a little more mutual respect for .the views of

others ? . , We are in a world composed of widely varying temperaments. Is it not well, therefore, that we should have a wide selection of different forms of "Public Worship" (or of " Divine Ser- vice "), thereby providing for the selection of a Church that is found to be the most helpful ?

In recent times the Church of England appears to have become increasingly embroiled in a controversy over the correct interpretation of Rubrics, &c., and the possible " sins

of commission " form a counterpart to the sins of " omission." All may think they are right, but no one knows.—I am,