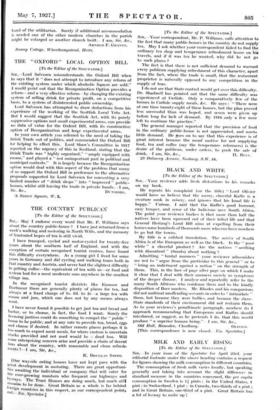 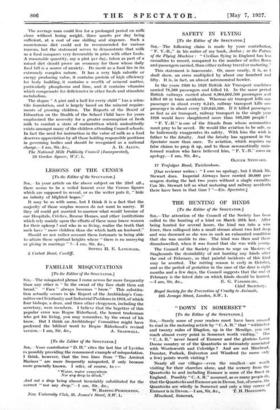 MILK AND EARLY RISING [To the Editor of the SPECTATOR.]

Sift,- -In your issue of the Spectator for April 23rd, your editorial footnote under the above heading contains a request for figures showing the milk consumption in different countries.

The consumption of fresh milk varies locally, but speaking generally and taking into account the slight differenc2 in standard measure in the countries concerned, the per capita consumption in Sweden is 1 pints ; in the United States; 1' pint ; in Switzerland, 1 pint ; in Canada, two-thirds of a pint ; and in Great Britain, one-third of a pint. Great Britain has a lot of leeway to make up I The average man could live for a prolonged period on milk- alone without losing weight, three quarts per day being sufficient, at a cost of one shilling and sixpence. Such a monotonous diet could not be recommended for various reasons, but the statement serves to demonstrate that milk as a food compares very favourably in price with other foods. A reasonable quantity, say a pint per day, taken as part of a mixed diet should- prove an economy for those whose daily food bill is a source of anxiety. Its merit as a food lies in its extremely complex nature. It has a very high calorific or energy producing value, it contains protein of high efficiency for body building, it contains a wealth of mineral matter, particularly phosphorus and lime, and it contains vitamins which compensate for deficiencies in other foods and stimulate metabolism.

The slogan " A pint and a half for every child " has a scien- tific foundation, and is largely based on the mineral require- ments of growing children. The Reports of the Board of Education on the Health of the School Child have for years emphasized the necessity for a greater consumption of fresh milk to combat a state of malnutrition which undoubtedly exists amongst many of the children attending Council schools. In fact the need for instruction in the value of milk as a food deserves appreciation by all those holding responsible positions in governing bodies and should be recognized as a national