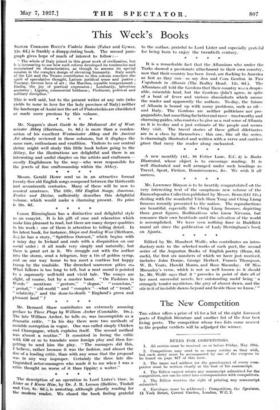 Plays by William Archer (Constable. 10s.). The late William Archer, he tells us, Was incorruptible as a dramatic critic. " In his day there were two methods of amiable corruption in vogue. One was called simply Chicken and Champagne, which explains. itself. The second method was almost a, routine." It consisted in feeing the critic with £50 or so to translate some foreign play and then for- getting to send him the play. " The managers did this, I believe, rather because it was the fashion, and almost the due of a leading critic, than with any sense that the proposal was in any way improper. Certainly the three late dis- tinguished actor-managers who made it to me when I was a critic thought no worse of it than tipping a waiter."