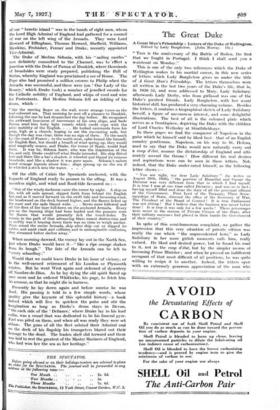 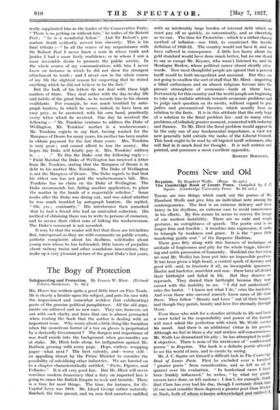 A Great Man's Friendship : Letters of the Duke of Wellington.

" Tuts is the anniversary of the Battle of Rolica, the first that we fought in Portugal. I think. I shall send you a waistcoat on Monday."

This is one of the only two references which the Duke of Wellington makes to his martial career, in this new series of letters which Lady Burghclere gives us under the title of A Great Man's Friendship. The letters themselves were all written in the last two years of the Duke's life, that is, in 1850-52, and were addressed to Mary, Lady Salisbury, afterwards Lady Derby, who from girlhood was one of the Duke's greatest friends. Lady Burghclere, with her usual historical skill, has produced a very charming volume. Besides the letters, it contains a biographical sketch of Lady Salisbury herself, a figure of uncommon interest, and some delightful illustrations. The best of all is the coloured plate which serves as a frontispiece, depicting the Duke with the children of Lord Charles Wellesley at Strathfleldsaye.

In these pages we find the conqueror of Napoleon in the guiSe which he himself said he liked best— that of an English country gentleman. Napoleon, on his way to St. Helena, used to say that the Duke would now naturally carry out a coup (Tent, assume the dictatorship of England and ulti- mately ascend the throne ! How different his real desires and aspirations Were can be seen in these letters: Not, indeed, that the Duke under-rated himself, as the following letter shows :— " You are right, my dear Lady Salisbury" (he writes on August 28th, 1850), " the position of Hannibal and Caesar thp Dictator was very different from that in which I find myself. It is .true I was at one time called Dictator ; and was so in fact ; having myself filled and done the duty of all the principal officers of the Government. First Lord of the Treasury, Three Seem taryships of State, directed the office of the Secretary of War, The President of the Board of Control ! It is true Parliament was not sitting ! But I believe that the business was never better done ! It is true it was only for a few weeks ! Those personages were never in the station of Private Citizen of the State, after their military successes had placed in their hands the Government of their country."

In spite of this semi-humorous complaint, we gather the impression that this very situation of private citizen was really the one which " the unprecedented hero," as Lady Salisbury in her more girlish moments calls him, really valued. He liked and desired power, but lie found his road to it, not in the coup d'etat, bid by the simpler means of becoming Prime Minister ; and when he proved an indifferent occupant of that most difficult of all positions, he was quite willing to resign it to another. Indeed, the letters open with an extremely generous appreciation of the man who really supplanted him as the leader of the Conservative Party. " There is no getting on without him," he writes of Sir Robert Peel ; " he is a wonderful fellow":" And "Sir Robert's pre- mature death evidently moved him sincerely: This is his final tribute :—" In all the course of my acquaintance with Sir. Robert Peel I never knew a man in whose truth and justice I had a more lively confidence, or -in whom I saw a more invariable desire to promote the public service. In the whole course of my communications with him I never knew an instance in which he did not show the strongest attachment to truth ; and I never saw in the whole course of iny life the slightest reason for suspecting that he stated

anything which he did not believe to be the fact." - - But the bulk of his letters dO not deal with these high matters of State. They deal rather with the day-to-day life and habits of the great Duke, as he records him to his chosen confidante. For example, he was much troubled by auto- graph hunters, to which he seems, indeed, to have been an easy prey, as he answered, with his own hand, practically every letter which he received. One day he received the following :—" Mr. Tomkins ventures to address the Duke of Waington. Mr. Tomkins' mother is a washerwoman ; Mr. Tomkins regrets to say that, having washed for the Marquess of Douro for many years, his mother has been unable to obtain payment for the last three years. Mrs. Tomkins is very poor ; and cannot afford to lose the money. She hopes the Duke will kindly pay it. Mrs. Tomkins' address is. . . ." To this the Duke sent the following reply " Field Marshal the Duke of Wellington has received a letter from Mr. Tomkins, stating that the Marquess of Douro is in debt to his mother Mrs. Tomkins. The Duke of Wellington is not the Marquess of Douro. The Duke regrets to find that his eldest son has not paid the washerwoman's bill. Mrs. Tomkins has no claim on the Duke of Wellington. The Duke recommends her, failing another application, to place the matter in the hands of a respectable solicitor." Some weeks after the Duke was dining out, and was asked whether he was much troubled by autograph hunters. He replied, " Oh, yes ; coristantly." His interlocutor then remarked that he had a friend who had an unrivalled collection. His method of obtaining them was to write to persons of eminence. and to accuse their eldest sons of bilking the washerwoman. The Duke's comment is not recorded.

It may be that the reader will feel that these are trivialities But, interspersed as they are with comments on public events, pathetic complaints about his deafness, solicitudes about young men whom he has befriended, little bursts of prejudice about railway trains and other scandalous innovations; they make up a very pleasant picture of the great Duke's last years.