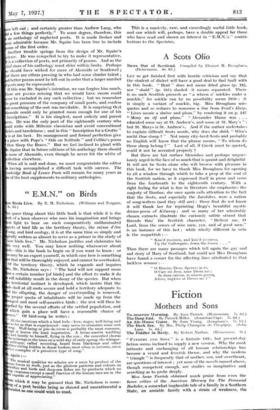 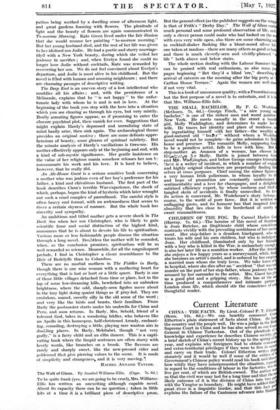 The Fiddler in Barly. By Robert Nathan. (Heinemann. M.)

" FATHERS AND SONS is a historic title, but present-day fiction seems inclined to supply a new version. Why the most intimate and unchanging of all human relationships has become a vexed and feverish theme, and why the modern " triangle " is frequently that of mother, son, and sweetheart, are questions of interest ; yet none of the novels named above, though competent enough, are studies so imaginative and

searching as to probe deeply.

Miss Anne Parrish obtained much praise from even the

fierce critics of the American Mercury for The Perennial BaChelor, a somewhat implacable tale of a family in a Southern State, an amiable family with a strain of weakniss, the pathos being soothed by a dwelling sense of afternoon light, and great gardens foaming with flowers. The plenitude of light and the beauty of flowers are again communicated in To-morrow Morning. Kate Green lived under the fair illusion that she would resume her painting " to-morrow morning." But her young husband died, and the rest of her life was given to her idolized son Jodie. He had a poetic and starry marriage- idyll with a New York beauty, during which she veiled her jealousy in sacrifice ; and, when Evelyn found she could no longer love Jodie without cocktails, Kate was rewarded by recovering her son. We do not feel convinced about Evelyn's departure, and Jodie is most alive in his childhood. But the novel is filled with human and amusing neighbours ; and there are charming passages of descriptive writing.

The Deep End is an uneven story of a lost intellectual who muddles all his affairs ; and, with the persistence of a Melisande, explains that he " is not happy " to the unfor- tunate lady with whom he is and is not in love. At the beginning of the book you step with the hero into a situation which you see clearing as through his eyes, but very mistily. Really arresting figures appear, as if promising to enter the obscure psychical plot, then vanish for ever. Suggestions that Might explain Hardy's depressed and unrealizing state of mind hazily arise, then sink again. The archaeological theme provides an original motive ; there are some delicate appre- hensions of beauty, some gleams of spiritual subtlety. But the minute analysis of Hardy's vacillations is tirespme. His mother effectively appears only at the beginning and end, with a kind of sub-mystic significance. Her gentle insistence on the value of her religious mania somehow releases her son to consummate his work and his love. It is hard to believe, however, that he really did.

An Ale-House Guest is a serious sensitive book concerning a mother who was jealous even of her boy's preference for his father, a kind and chivalrous husband. The first part of the book describes Clara's terrible War-experience, the shock of which, perhaps, began the kind of hysteria which later wrought out such a cruel complex of parenthood. The careful style is often heavy and formal, with an awkwardness that seems to cover a certain shyness of manner. But the whole book has sincerity and sympathy.

An ambitious and titled mother gets a severe shock in The Dark Sea when her son Christopher, who is likely to gain scientific fame and social distinction of the highest kind, announces that he is about to devote his life to spiritualism. Various more or less fashionable people discuss the situation through a long novel. Doubtless the mother will be consoled, when, as the conclusion promises, spiritualism will be as well rewarded as science. Meanwhile, for all the magniloquent prelude, I find in Christopher a closer resemblance to the Heir of Redelyffe than to Columbus.

There are no morbid mothers in The Fiddler in Early, though there is one wise woman with a mothering heart for everything that is lost or hurt or a little queer. Barly is one of those little villages detached from time or place, lost in the lap of some low-dreaming hills, bewitched into an unbroken brightness, where the odd, sharply-seen figtfres move about in the lazy light doing quaint things as if pixy-led. They are credulous, mazed, sweetly silly in the old sense of the word ; and very like the birds and beasts, their familiars. From Early the postmaster starts under his umbrella for China and Peru, and soon returns. In Barly, Mrs. Sebold, friend of a tolerant God, takes in a wandering fiddler, who behaves like an Apollo in this homespun, half-christened Arcady, enchant- ing, consoling, destroying a little, playing rare wanton airs in dusiding places. In Barly, Mehitabel, though " not very godly," is a faery child and an elfin dancer. This is- a capti- vating book where the limpid sentences are often starry with lovely words, like branches on a brook. The flavours are rarely and sharply sweet, like the new-pressed cider and goldenrod that give piercing values to the scene. It is made of simplicity and strangeness, and it is very moving.1 RACHEL ANNAND TAYLOR.-