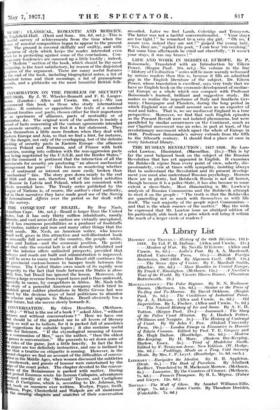 Faglefield-Hull. (Dent and Sons. 10s. 6d. net.)-This is 'useful survey of achievements from the time when the over of musical composition began to appear to the present ay. The ground is covered skilfully and swiftly, and with raciness of style which keeps the reader interested even hen he is protesting against some of the conclusions. Con- emporary tendencies are summed up a little hastily ; indeed, •• Modern" section of the book, which should be the most itriguing, is the least satisfactory, by reason of the disjointed iogress of the argument. There are many useful features t the end of the book, including biographical. notes, a list. of ethnical terms and their meanings, a list of gramophone cords, and a plebiscite on the most beautiful British folk- mes.