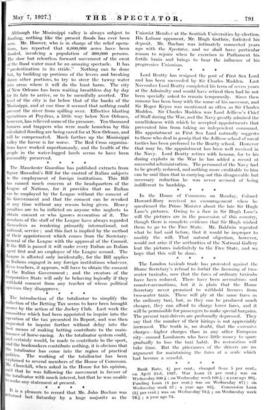 Page 3, 7 May 1927 — The London taxicab trade has protested against the Home Secretary's
Close

The London taxicab trade has protested against the Home Secretary's

refusal to forbid the licensing of two- seater taxicabs, now that the fares of ordinary taxicabs have been reduced. There have been accusations and counter-accusations, but it is plain that the Home Secretary never promised to withhold licences from two-seater taxis. These will ply at the same fares as the ordinary taxi, but, as they can be produced much cheaper, they can afford to charge lower fares, and it will be permissible for passengers to make special bargains. The present taxi-drivers are profoundly depressed. They say that the number of their hirings is not appreciably increased. The truth is, no doubt, that the excessive charges—higher charges than in any other European city—caused Londoners who have little • money to spare gradually to lose the taxi habit. Its restoration will take time. But the grievances of the drivers arc no argument for maintaining the fares at a scale which had become a scandal.