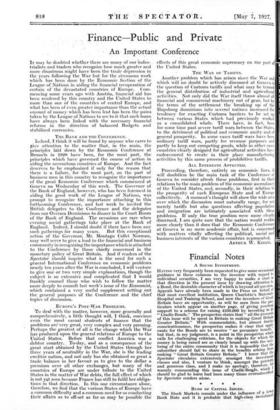 HAVING very frequently been requested to give some occasional guidance in these columns to the investor with regard to individual securities, I am very happy to make a start in that direction in-the present issue by drawing attention to a Bond, the desirable character of which is beyond all question. Appeals have already been made in the Press on behalf of that most excellent institution, Queen Charlotte's Maternity Hospital and Trairtibg School, and now the investors of Grea't Britain have an opportunity, as will be seen from the par' ticulars which appear on another page, of giving practies support to a scheme for raising 1250,000. by investing in £1 " Cradle-Bonds." The prospectus states that all the proceeds of this issue will be spent in Britain in making Great Britain Greater Britain." With commendable, but almost finicky „ conscientiousness, the prospectus makes it clear that apps cants for the Bonds are to receive " no pecuniary benefit;' but that, in my judgment, is a point in the prospectus which calls for challenging criticism, for the objects for which the money is being raised are so clearly bound up with the Well' being of the entire community that it is impossibke that the subscriber should fail to share in the benefits arising from making " Great Britain Greater Britain." I know timt the Spectator circulates extensively amongst the investment classes and also, I venture to think, amongst the patriotic and generous class, and I make no apology, therefore, for warmly commending this issue of craclle-Bowls, which should be glad to learn had been many times oversubscribed by Spectator readers alone.