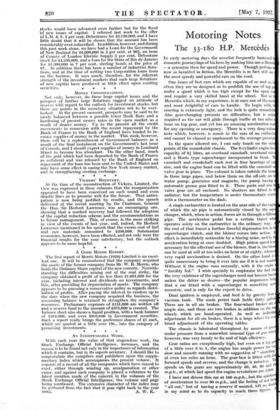 Not only, however, do these large capital issues and the prospect of further large flotations suggest an attitude of reserve with regard to the outlook for investment stocks, but there are points in the monetary situation not to be over- looked. At the present moment, prospects may be said to be nicely balanced between a possible lower Bank Rate and a hardening of present money rates in the open market as a result of dearer money. Up to the present all the credit movements in connexion with the recent repayment by the Bank of France to the Bank of England have tended to in- crease supplies of money in the market. This week, however, there will be a replenishment of Government balances as a result of the final instalment on the Government's last issue of Consols, and I should expect supplies of money in Lombard Street to become less abundant. On the other hand, much of the gold which had been deposited by the Bank of France as collateral and was released by the Bank of England on repayment of the loan has been sent to the United States and rimy have some effect in easing the New York money market, and in strengthening sterling exchange.