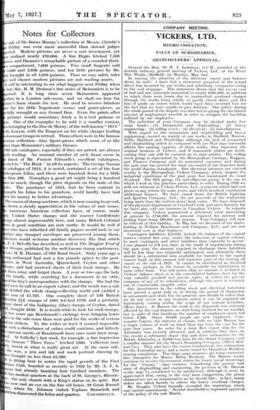 It will be interesting to see what happens next Friday when late AIrs,B. M. Denison's fine series of Meissoniers is to be persed. It is long since seven Meissoniers appeared ether in a London sale-room, and we shall see how the inter's fame stands the test. He used to receive fabulous is for his little Napoleonic scenes and genre-pieces, as refully wrought as any Gerard Dou. Even the prints after pictures would sometimes fetch a In n Ired guineas or re. One of the examples to be sold is a smaller version, ce belonging to the Duc de Morny, of the well-known " 1814 " the Louvre, with the Emperor on his white charger leading downcast troops in retreat. Three others were in the famous retan collection—tiny figure-pieces which some of us like tter than Meissonier's military themes.

Old sale catalogues, especially if they are priced, are always rth reading. An unusual number of such items occur in latest of Mr. Francis Edwards's excellent catalogues, noted to " The Book " in all its aspects. The George Nassau e catalogue of 1824, it is noted, contained a set of the four akespeare folios, and these were knocked down for a little .s than £80. Nowadays a good set might bring a hundred ies as much, though the price depends on the state of the les. The purchaser of 1824, had he been content to queath his folios to his grandson, could hardly have laid wn his money to better advantage.

The season of stamp auctions, which is now coming to an end,

• shown a steady appreciation in the values of rare issues. numerous American collectors have, of course, made rlt United States stamps and the scarcer Confederate nips almost unprocurable here, and many British Colonial • ues in good condition are now costly. It would be well if ise who have inherited old family papers would look to see ether any stamped envelopes are preserved among them. Hectors would welcome another discovery like that which F. J. Melville has described so well in The Mayfair Find of re Stamps, Published by the well-known stamp auctioneers, isrs. H. R. Harmer, of Old Bond Street. Sixty years ago a ung enthusiast had sent a few pounds apiece to the post- stern in West Australia, Queensland, Ceylon and other lonies, and had received sheets, of their local stamps. He t them away and forgot them. A year or two ago the lady the family, while searching for a document in an attic, nd the boy's correspondence with the stamps. She had the d sense to call in an expert valuer, and the result was a sale t thrilled the whole stamp-collecting world and yielded a 1 sum of £7,707. One complete sheet of 240 British umbia 2id. stamps of 1861 fetched £750, and a probably que sheet of the halfpenny (lilac) stamps of Ceylon, dated 8, brought £650. It is worth while to look for such stamps. few years ago Rembrandt's etchings were bringing lower es in the sale-room than were paid for the works of certain ern etchers. To the writer at least it seemed impossible t such a disturbance of values could continue, and latterly supreme merits of Rembrandt have once more been recog- ed. At Sotheby's last week, for example, a fine impression he famous " Three Trees " fetched £600. Collectors may y invest in what is really great art. At the same sale, the Way, a pen and ink and wash portrait drawing by rer brought no less than £2,500. t is fitting here to notice the rapid growth of the First tions Club, founded so. recently as 1922 by Mr. A. J. A. ens but already boasting four hundred members. The has modest quarters at the back of St. George's, Blooms- '—the only church with a King'S statue on its spire. But as now cast an eye on the fine old house; 99 Great Russell set, where Dr. Johnson visited Topham Beauclerk and btless discovered the folios and quartos. CONNOISSEUR.