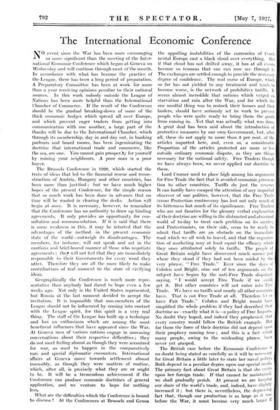 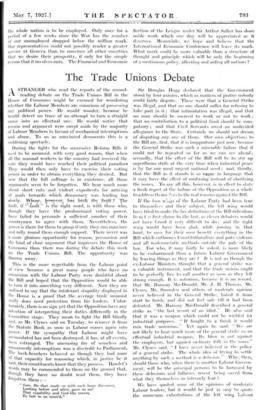 NO event since the War has been more encouraging or more significant than the meeting of the Inter- national Economic Conference which began at Geneva on Wednesday and will continue through most of the month. In accordance with what has become the practice of the League, there has been a long period of preparation. A Preparatory Committee has been at work for more than a year receiving opinions peculiar to their national sources. In this work nobody outside the- League of Nations has been more helpful than the International Chamber of Commerce. If the result of the Conference should be the gradual breaking-down of some of the thick economic hedges which spread all over Europe, and which prevent eager traders from getting into Communication with one another, a large part of the thanks will be due to the International Chamber, which through its membership, day in and day out, in banking parlours and board rooms, has been ingeminating the doctrine that international trade and commerce, like the sea, are one. You cannot gain prosperity for yourself by ruining your neighbours. A poor man is a poor buyer.

The Brussels Conference in 1920, which started the train of ideas that led to the financial rescue and recon- struction of Austria, Hungary and other countries, has been more than justified ; but we have much higher hopes of the present Conference, for the simple reason that so much work has been done in advance that no time will be wasted in clearing the decks. Action will begin at once. It is necessary, however, to remember that the Conference has no authority to draw up binding agreements. It only provides an opportunity for con- sultation and recommendation. If it is said that there is sonic weakness in this, it may be retorted that the advantages of the method—in the present economic state of the world—outweigh its disadvantages. The members, for instance, will not speak and act in the cautious and brief-bound manner of those who negotiate agreements ; they will not feel that they arc immediately_ responsible to their Governments for every word they utter. Therefore they are all the more likely to make contributions of real moment to the store of vivifying ideas.

Geographically the Conference is much more repre- sentative than anybody had dared to hope even a few Weeks ago. Not only is the United States represented, but Russia at the last moment decided to accept the invitation. It is impossible that non-members of the League should not be influenced by coming into contact with the League spirit, for this spirit is a very real thing. The staff of the League has built up a technique and has. an enthusiasm which are among the most beneficent influences that have appeared since the War. At Geneva men of various nations engage in unceasing conversations about their respective difficulties ; they do not meet feeling almost as though they were accoutred for war, as used to happen in the comparatively rare and special diplomatic encounters. International affairs at Geneva move towards settlement almost insensibly, as though they were matters of routine, which, after all, is precisely what they are or ought to be. It will be a tremendous achievement if the Conference can produce economic doctrines of general application, and we venture to hope for nothing less.

What are the difficulties which the Conference is bound to discuss ? At the Conferences at Brussels and Genoa the appalling instabilities of the currencies of Conti- nental Europe cast a black cloud over everything. But if that cloud has not drifted away, it has at all events become so tenuous that one can now see through it. The exchanges are settled enough to provide the necessary degree of confidence. - The real curse of Europe, which so far has not yielded to any treatment and tends to become worse, is the network of prohibitive tariffs. It seems almost incredible that nations which verged on starvation and ruin after the War, and for which the one needful thing was to restock their houses and their larders, should have seriously set to work to prevent people who were quite ready to bring them the goods from coming in. Yet that was actually what. was done. A great deal has been said about the introduction of protective measures by our own Government,. but, after all, these do not apply to more than 3 per cent. of the imported here, and, even so, a considerable Proportion of the. articles protected are more or lc outside ordinary economic. dispute, as they are things necessary for the national safety. Free Traders though we have always been, we never applied our doctrine to them.

Lord Cromer used to place high among his arguments for Free Trade the fact that it avoided economic provoc a- tion to other countries. Tariffs do just the reverse. It can hardly have escaped.the attention of any impartial observer of our politics, however, that the Free Trade versus Protection controversy has Jost not only much of its bitterness but much of its significance. Free Traders who are not fanatics for the plenary verbal explanation of their doctrine are willing in the distracted and abnormal world of to-day to treat each problem on its merits ; and Protectionists, on their side, seem. to be ready to admit that tariffs are an obstacle on the immediate road which we all wish to travel, and that the organiza- tion of marketing may at least equal the efficacy which they once attributed solely to tariffs. The people of Great Britain might have. discovered much sooner just where they stood if they had not been misled by the very phrase, " Free Trade." Ever since the days of Cobden and Bright, nine out of ten arguments on the subject have begun by the anti-Free Trade disputant saying, " I would accept Free. Trade if we could get it. But other countries will not enter into Free Trade. We have no tariffs and nearly all other countries have. That is not Free Trade at all. Therefore Id 115 haVe Fair Trade." Cobden and Bright would have simplified the whole problem if they had described their doctrine as—exactly what it is—a policy of Free Imports. No doubt they hoped, and indeed they prophesied, that every country would follow the British example. But for them the force of their doctrine did not depend upon their prophecy coming true ; and this is a fact which many people, owing to the misleading phrase, have never yet grasped. The British case before the Economic Conference is no doubt being stated as carefully as it will be necessary for Great Britain a little later to state her naval policy. Both depend in a peculiar degree upon our special needs. The primary fact about Great Britain is that she exists upon her foreign trade. If that cannot be maintained, we shall gradually perish. At present we are keeping our share of the world's trade, and, indeed, have slightly increased it ; but there is, nevertheless, the depressing fact that, though our production is as large as it was before the War, it must becoine very much larger if the whole nation is to be employed. Only once for a period of a few weeks since the War has the number of our unemployed dropped below the million mark. Our representatives could not possibly render a greater service at Geneva than to convince all other countries that we desire their prosperity, if only for the simple reason that it involves ours. The Financial and Economic Section of the League under Sir Arthur Salter has done noble work which one day will be appreciated as it deserves. Meanwhile, we hope and believe that the International Economic Conference will leave its mark. What mark could be more valuable than a structure of thought and principle which will be only the beginning of a continuous policy, affecting and aiding all nations ?