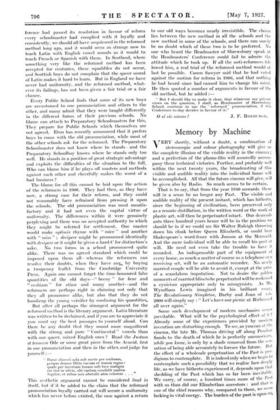 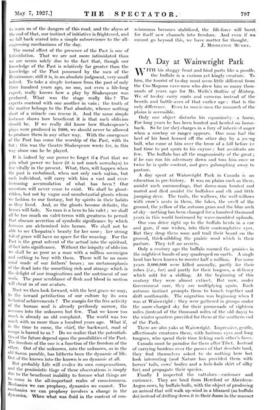 Memory by Machine V ERY shortly, 'without a doubt, a combination

of stereoscopic and colour photography will give th the complete illusion of the visible reality in the cinema ; and a perfection of the phono-film will assuredly accom- pany these technical victories. Further, and probably well within the next twenty years, the broadcasting of this visible and audible reality into the individual home will be accomplished. All that the future cinema will give, will be given also by Radio. So much seems to be certain. That is to say, that from the year 1940 onwards there will in a sense be no longer any Past. The visible and audible reality of the present instant, which has hitherto, since the beginning of civilization, been preserved only as a remote distillation, in the written word or the work of plastic art, will then be perpetuated intact. Our descend- ants three hundred years hence will be in the position we should be in if we could see Sir Walter Raleigh throwing down his cloak before Queen Elizabeth, or could hear Shakespeare's word-fence with Jonson at the Mermaid. And the mere individual will be able to recall his past at will. He need not even take the trouble to have it recorded. An indispensable part of the equipment of every home, as much a matter of course as a telephone or a receiving set, will be an automatic recorder. No newly married couple will be able to avoid it, except at the price of a scandalous imputation. Not to desire the golden moments of married bliss to be perpetuated will be reckoned a cynicism appropriate only to misogynists. As Mr. Wyndham Lewis imagined in his brilliant essay, -The Revolutionary Simpleton, Darby and Joan of A.D. 2000 will simply say : " Let's have our picnic at Richino:! all over again." Some such development of modern mechanics seems inevitable. What will be the psychological effect of it ? Already some of the experiences provided by modern invention are disturbing enough. To sec, as you can at the cinema, the late Mr. Thomas driving off along Pendme Sands to the death of which he is perfectly unconscious, while you know, is only by a shade removed from time sen- sation of being able accurately to foresee the future. But the effect of a wholesale perpetuation of the Past is pro- digious to contemplate. It is indeed only when we begin to contemplate such a possibility that we realize how deeply life, as we have hitherto experienced it, depends upon that shedding of the Past which has so far been inevitable. We carry, of course, a hundred times more of the last with us than did our Elizabethan ancestors : and that Is one of the chief reasons why, compared to them, we seem lacking in vital energy. The burden of the past is upon us, to warn us of the dangers of this road, and the abyss at the end of that, our instinct of initiative is frightened, and we fall back scared into a simple subservience to the all- engrossing mechanisms of the day. The moral effect of the presence of the Past is one of intimidation. That we are not more intimidated than we are seems solely due to the :fact that, though our knowledge of the Past is relatively far greater than the knowledge of the Past possessed by the men of the Renaissance, still it is, in an absolute judgment, very small indeed. To take a simple instance from the past of only three hundred years ago, no one, not even a life-long expert, really knows how a play by Shakespeare was produced. What was the stage really like ? The experts contend with one another in vain ; the truth of the matter belongs to the Past absolute, whence nothing short of a miracle can rescue it. And the same simple instance shows how beneficent it is that such oblivion should be. If we really did know how Shakespeare's plays were produced in 1600, we should never be allowed to produce thein in any other Wray. With the emergence of the Past has come the worship of the Past, with its fiat : this was the theatre Shakespeare wrote for, in this way alone can he be played. It is indeed by our power to forget tl e Past that we gain what power we have (it is not much nowadays) to live vitally in the present. What, then, will happen when the past is embalmed, when not only each nation, but each individual, will carry with him a vast and ever- increasing accumulation of what has been ? Our ancestors will never cease to exist. We shall be ghost- ridden, but not by vague and unsubstantial ghosts whom we fashion to our fantasy, but by spirits in their habits as they lived. And, as the ghosts become definite, the heroes will fade. No man is a hero to his valet ; we shall all be too much on valet-terms with greatness to permit that obscure accretion of symbolic significance by which humans are .alehemized into heroes. We shall not be able to see Cleopatra's beauty for her nose ; her strong toil of grace will have no space for the weaving. For the Past is the great solvent of the actual into the spiritual, of fact into significance. Without the iniquity of oblivion we shall be as poor as a man with a million sovereigns and nothing to buy with them. There will be no more coral made of our fathers' bones ; no metamorphosis of the dead into the something rich and strange which is the delight of our imaginations and the nutriment of our souls. The poor semblance of flesh and blood in motion will cheat us of our avatars.

Must we then look forward, with the best grace we may, to the inward petrifaction of our culture by its own technical achievements ? The margin for the free activity of the human soul is already perilously narrow, the avenues into the unknown but few. That we know too much is already an old complaint. The world was too much with us mere than a hundred years ago. What if, in the time to come, the chief, the backward, road of escape is barred to us ? Do we realize that the potentiali- ties of the future depend upon the possibilities of the Past. The freedom of the one is a function of the freedom of the other. Out of the unknown, into the unknown, as in the old Saxon parable, has hitherto been the dynamic of life. Out of the known into the known is no dynamic at all. But probably- Life will evolve its own compensations, and the pessimistic tinge of these observations is simply due to the beneficent inability to foresee what things are to come_ in the all-important realm of consciousness. Mechanics we can prophesy, dynamics- we cannot. The mechanics we can -prophesy involves a change in the dynamics. When -what was fluid in the -content of eon- sciousness becomes stabilized, the life-force will burst. for itself new channels into freedom. And even if we cannot go beyond this, we have matter for thought.