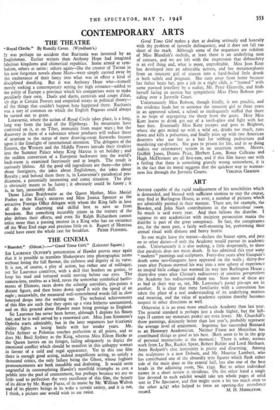 "Hamlet." (Odeon.)—" Good Time Girl." (Leicester Square.) SIR LAURENCE OLIVIER'S presentation of HaMlet proves once again that it is possible to translate Shakespeare into photographic terms without losing the full flavour, the richness and dignity of its verse. It is not, of course, a play of action, but • rather one of soliloquy, yet Sir Laurence contrives, with a skill that borders on genius, to keep his mad and tortured world moving before our eyes. The camera-lens, restless as a bird, roves the somewhat symbolical battle- ments of Elsinore, races down the echoin corridors, pin-points a distant figure, and then bears down upon it with the speed of an eagle ; meanwhile, the measured well-remembered words fall in slow honeyed drops into the waiting ear. The technical achievements of this film are such that they open up a vista hitherto unexamined, and on this ground alone Hamlet must bring prestige to England. Sir Laurence has never been better, although I deplore his flaxen hair, and he is well served by a renowned cast. Miss Jean Simmons's Ophelia starts admirably, but in the later sequences her histrionic ability, fights a losing battle with her tender years. Mr. Felix Aylmer as Polonius touches perfection at all points, and so does Mr. Basil Sydney as the King, whereas Miss Eileen Herlie as the Queen hovers on its fringes, failing adequately to depict the emotional conflict which should be manifest in this unhappy woman in favour of a cold and regal appearance. Yet in this one film there is enough good acting, indeed magnificent acting, to satisfy a thousand critics, the only failure being the Ghost, whose foghorn pronouncements are both inaudible and deafening. It would seem ungrateful in contemplating Hamlet's manifold triumphs to cast a pebble into the pool of contentment, but perhaps because we are so little used to perfection the very excellence of this film, the beauty of its decor by Mr. Roger Furze, of its music by Mr. William Walton and of its players brings in its wake a certain satiety, and it is not, I think, a picture one would wish to see twice. Good Time Girl makes a shot at dealing seriously and honestly with the problem of juvenile delinquency, and it does not fall too short of the mark. Although some of the sequences are redolent of Miss Blandish's orchids, at least there is an underlying note of censure, and we are left with the impression that debauchery is an evil thing and, what is more, unprofitable. Miss Jean Kent has developed into an admirable actress, and her metamorphosis from an innocent girl of sixteen into a hard-boiled little drunk is both subtle and poignant. She runs away from home because her father beats her, gets a job in a night club, is " framed " with some pawned jewellery by a waiter, Mr. Peter Glenville, and finds herself facing an austere but sympathetic Miss Flora Robson pre- siding over a Juvenile Court.

Unfortunately Miss Robson, though kindly, is not psychic, and the evidence leads her to sentence the innocent girl to three years in an approved school, a school so inadequately staffed that there is no hope of segregating the sheep from the goats. Here Miss Kent learns to drink gin out of a tooth-glass and fight with her bare fists. Eventually Miss Kent escapes and goes to Brighton, where she gets mixed up with a wild set, drinks too much, runs down and kills a policeman, and finally joins up with two American deserters who use her as a bait for robbing pedestrians and murdering car-drivers. She goes to prison for life, and in so doing indicts our reformatory system in no uncertain terms. Messrs. Griffith Jones, Dennis Price, Herbert Lom, Bonar Colleano and Hugh McDermott are all first-rate, and if this film leaves one with a feeling that there is something gravely wrong somewhere, it is in the fact that its moral suggests that the quickest way to wanton-