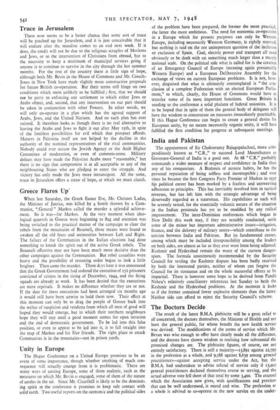 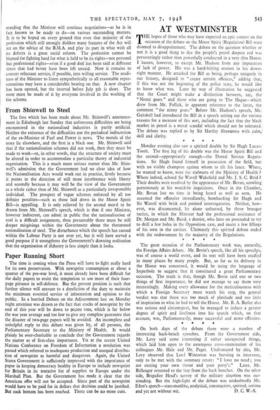 The result of the latest B.M.A. plebiscite will be a great relief to all concerned, the doctors themselves, the Minister of Health and not least the general public, for whose benefit the new health service was devised. The modifications of the terms of service which Mr. Bevan was wise enough to offer have clearly made all the difference, and the doctors have shown wisdom in realising how substantial the promised changes are. The plebiscite figures, of course, are not entirely satisfactory. There is still a majority-13,891 against 12,799 in the profession as a whole, and 9,588 against 8,639 among general practitioners—against accepting service under the Act, but the B.M.A. had undertaken to advise refusal of service only if 13,000 general practitioners declared themselves averse to serving, and the actual adverse vote fell short of that total by some 3,400. The counsel which the Association now gives, with qualifications and provisos that can be well understood, is sound and wise. The profession as a whole is advised to co-operate in the new service on the .under- standing that the Minister will continue negotiations—as he is in fact known to be ready to do—on various outstanding matters. It is to be hoped on every ground that even that majority of the profession which still strongly dislikes many features of the Act will act on the advice of the B.M.A. and play its part in what with all its defects is a great social reform. The profession cannot be blamed for fighting hard for what it held to be its rights—not personal but professional rights—even if a good deal has been said at different times that had better have been left unsaid. Now it remains to convert reluctant service, if possible, into willing service. The readi- ness of the Minister to listen sympathetically to all reasonable repre- sensations may have a considerable bearing on that. A new chapter has been opened, but the interval before July 5th is short. The most must be made of it by everyone involved in the working of the scheme.