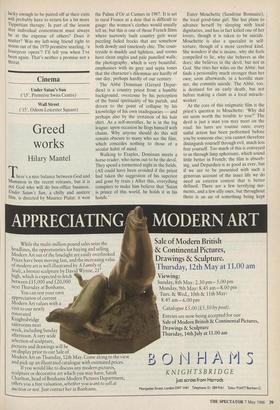 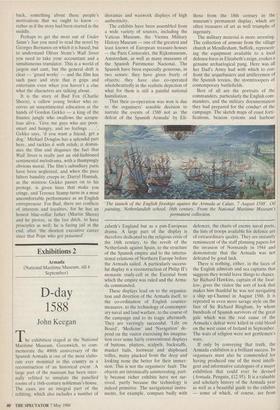 here's a nice balance between God and Mammon in the recent releases, but it is not God who will do box-office business. Under Satan's Sun, a chilly and austere film, is directed by Maurice Pialat; it won

the PaIme d'Or at Cannes in 1987. It is set in rural France at a date that is difficult to gauge: the women's clothes would usually tell us, but this is one of those French films where narrowly built country girls wear puzzling faded frocks that are somehow both dowdy and timelessly chic. The coun- tryside is muddy and lightless, and rooms have clean angles and pale panelled walls; the photography, which is very beautiful, emphasises with its grey and sepia tones that the character's dilemmas are hardly of our day, perhaps hardly of our century.

The Abbe Donnisan (Gerard Depar- dieu) is a country priest from a humble background, overcome by his perception of the banal spirituality of his parish, and driven to the point of collapse by his knowledge of his own inadequacies — and perhaps also by the irritation of his hair shirt. As a self-mortifier, he is in the big league: upon occasion he flogs himself with chains. Why anyone should do this will remain obscure to many who see the film, which concedes nothing to those of a secular habit of mind.

Walking to Etaples, Donissan meets a horse-trader, who turns out to be the devil. They spend a tormented night in the fields. (All could have been avoided if the priest had taken the suggestion of his superior and gone by train.) After this, everything conspires to make him believe that 'Satan is prince of this world, he holds it in his hands.' Enter Mouchette (Sandrine Bonnaire), the local good-time girl. She has plans to advance herself by sleeping with local dignitaries, and has in fact killed one of her lovers, though it is taken to be suicide. Mouchette is also a specialist in self- torture, though of a more cerebral kind. She wonders if she is insane, why she feels compelled to lie, why she behaves as she does; she believes in the devil, but not in God. She tries her wiles on the Abbe, but finds a personality much stronger than her own; soon afterwards, in a horrific man- ner, she commits suicide. The Abbe, too, is destined for an early death, but not before staking a claim as a local miracle- worker.

At the core of this enigmatic film is the priest's question to Mouchette: 'Why did sin seem worth the trouble to you?' The devil is just a man you may meet on the road: his lures are routine ones; every sinful action has been performed before you by someone else; you cannot therefore distinguish yourself through evil, much less free yourself. Too much of this is conveyed to us through limp aphorisms, which sound little better in French; the film is absorb- ing, and Depardieu is as good as ever, but if we are to be presented with such a generous account of the inner life we do need an exterior context that is better defined. There are a few terrifying mo- ments, and a few silly ones, but throughout there is an air of something being kept back, something about these people's motivations that we ought to know — rather as if the story had been started in the middle.

Perhaps to get the most out of Under Satan's Sun you need to read the novel by Georges Bernanos on which it is based; but to understand Oliver Stone's Wall Street you need to take your accountant and a simultaneous translator. This is a world of jargon and cant, but the general drift is clear — 'greed works' — and the film has such pace and style that it grips and entertains even when you haven't a clue what the characters are talking about.

It is the story of Bud Fox (Charlie Sheen), a callow young broker who re- ceives an unsentimental education at the hands of Gordon Gekko — a king of the finance jungle who swallows the scrupu- lous alive. 'Give me guys who are poor, smart and hungry, and no feelings . . Gekko says, if you want a friend, get a dog.' Michael Douglas has a splendid part here, and tackles it with relish; it domin- ates the film and disguises the fact that Wall Street is really just an old-fashioned sentimental melodrama, with a thumpingly obvious moral. The film's subsidiary parts have been neglected, and when the pace falters banality creeps in: Darryl Hannah, as the mistress Gekko passes on to his protege, is given lines that make you cringe, and Terence Stamp turns in a most uncomfortable performance as an English entrepreneur. For Bud, there are conflicts of interests and loyalties, for he has an honest blue-collar father (Martin Sheen) and he proves, in the last ditch, to have principles as well; he is facing jail at the end, after 'the shortest executive career since that Pope who got poisoned'.