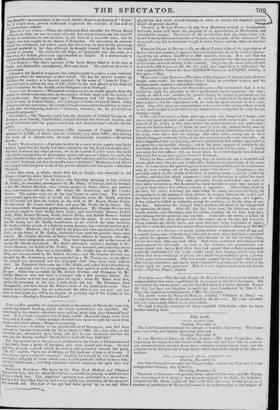 Page 5, 7 November 1829 — Cline:re--The quantity of cider produced in the county of Devon
Close

Cline:re--The quantity of cider produced in the county of Devon

this year wile mimed any former bearing, which the oldest agriculturist can recollect. On individual in this county calculates upon making more than four thousand hogsheads. It has been computed that at least twelve thousand empty casks have been sold in Exeter ; a large number of which have been brought by vessel from London and other places.— Western Luminary. Resmeeenors.—A widow in the neighbourhood of Devonport, who had been induced to become responsible for the payment of 5001. for a man who, on the following day, absconded, upon beine'' told that he was insolvent, and that she must pay the money, replied C;ThankGod I shall still have 1001. left."

TIM ADVANTAGE OF A SW:INT.—A gentleman in the South of Ireland received e visit lately from a party of Rockites, who were armed with sticks. He had just time to seize a pistol, which he cocked and presented towards the party. "13e off," said he, "you set of villians, or I'll shoot one of you at all events. 1 hare my eye upon you at ties moment:' Luckily for himself, he was blessed with that happy obliquity of vision which caused each particular ruffian to fancy him. sill the marked. omen; and they withdrew without obtaining the spoil they had ceme for.

' ARTIFICIAL Er.-Lio.=We learn by the New York Medical and Physical Aurnal for July, that Dr: Abner Horton has succeeded in forming an artificial eyelid for a black boy. This important operation was performed in a short time ; and in a few days after, the boy had a very sightly eye, answering all the purposes of a natural one. The ball of the eye had been gored by ats ox, and other

physicians had made several attempts to unite or restore the detached eye-lid, which all proved abortive.

last week, laden with bones, the property of an agriculturist of ',Morayshire, and intended for manure. The master of the vessel states that the bones were col. lected from the plains and marches of Leipsic, and are part of the remains of the thousands who fell in the battles fought betwixt France mid the Allies iu October . 1813.

ENGLISH TRADE IN HORSES.-■ By an official French table of the importation of horses into that country, it appears that our neighbours are in the habit of borrow ing at the rate of from 15,000 to 25,000 annually from us. It is said that the supply is almost entirely of stolen horses, accounting for the alarming prevalence of the crime of horse-stealing in this country. Supposing the mean price of each

horse to be 500 francs, or 20/. 16s. Sd., (and this supposition is moderate,) the sum expended by France has been 32,988,000 francs, or 1,374,916/, sterling, in five years.—Sun. Weneeeneceren Pmeces.—The sons of the Emperor of Austria have all been taught some trade ; the hereditary Prince being an excellent weaver, and his brothers good carpenters and cabinet-makers.

BRAITHWAITE AND ERICSSON'S STEAM-ENGINE.—WC understand that it is intended to apply the principle of the-e gentlemen's steam apparatus, the supe riority of which was satisfactorily proved during the recent experiments on the railroad, to the propelling of vessels. A vessel is forthwith to be fitted up with their engine ; and the experiment will, we hear, be made as soon as it is com plete. One of its great recommendations will consist in the saying of fuel, as well as the dead weight in coal which every steam-vessel es compelled to carry for use during a voyaee.

A Ii en NI.We nocnDILE.—Some time ago, a man was hanged at Calcutta, who was a very good swimmer, and could remain a long while under water. Availing

himself of his ability to slide himself into the places enclosed with pallisadoes, where the Indian ladies go to bathe, he used to seize one, without being seen by the others, and drown her, and then rob her of the jewels which these ladies never lay aside, even when they are bathing. The other ladies seeing one of their friends disappear suddenly, believed she was carried away by some crocodile. At last it happened that a young lady, who was attacked by this robber, succeeded in escaping from his horrible attempt ; and to the great surprise of everybody, she told them that she had been attacked, not by a crocodile but by a man. A search was made for the ruffian ; and, on being taken, he avowed that he had followed that trade for seven years past.—Courrie.r Francais. DUELS OF BEES.—On those fine spring days, in which the sun is beautiful and ; warm, duels may often be seen to take dace between two inhabitants of the same hive. In some cases, the quarrel appears to have begun within, and the combatants may be seen coming out of the gates eager "for blows." ' Sometimes a bee penscably settled on the outside of the hive, or walking about, is rudely jostled by another, and then the attack commences, each endeavourimg to °Nairn the most advantageous position. They turn, pirouette, throttle each other; and such is their bitter earnestness, that Reaumur has been enabled to conic near enough to observe them n with a lens without causing a separation. After rolling about in the dust, the victor, watching the thsse when his enemy uncovers his body, by elongating it, in tine attempt to sting, thrusts its weapon between the scales, and the next instant its antagonist stretches out its quivering wings, and expires. A bee cannot be killed so suddenly, except by crushing, as by the sting of another bee. Sometimes the stronger insect produces the death of the vanquished by squeezing its chest. After this feat has been done, the victorious bee constraitly remains, says Reaumur, near his victim, standing on his four front legs,

and rubbing the two posterior ones together. Sometimes the enemy is killed in e the hive ; then time victor always carries the corpse out of the city, and leaves it. e These combats are strictly duels, not more than two being concerned in them ; and this is even the case when armies of bees meet in combae—History of Inke-7.te COMFORTS OF A ['luso:v.—A pretty young widow of niucteen years of age and a comely young man of twenty-two, strangers to each other, had been committed to prison for separate offences. They were brought to the bar for trial, when, for the first time, they saw each other. Both were convicted and sentenced to imprisonment for one week. As soon as the sentence was pronounced, our swain stated, that during their trials they had agreed that solitary confinement might be ameliorated if the Court would grant their request, which was, that before they were conducted to prison, they might be permitted to go to a justice of the peace to be married. This was readily granted by the Court ; the parties after haying committed matrimony were committed to prison, and by order of the Court enjoy the same apartment. This is a vast improvement upon the Lynch code.—Natchez Paper, August.