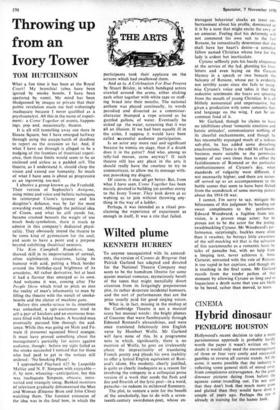 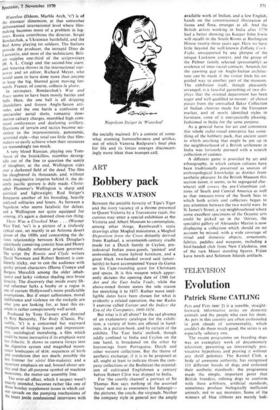 Hollywood's recent decision to take a more parsimonious approach is probably hardly worth the paper it wasn't written on. No doubt it would only need the encouragement of three or four very costly and successful gambles to reverse all current trends. All the same, it seems possible that the industry is reflecting some general shift of mood away from conspicuous extravagance. As the great dinosaur pictures dating from before the squeeze come trundling out, I'm not sure that they don't look that much more gross and glutted than they would have done a couple of years ago. Perhaps the eye is already in training for the leaner look. Waterloo (Odeon, Marble Arch, V) is of the dinosaur dimension, at that somewhat dehumanised international level where film- making becomes more of a problem in log- istics. Russia contributes the director, Sergei Bondarchuk, a Ukrainian battlefield, and the Red Army playing tin soldiers. The Italians provide the producer, the intrepid Dino de Laurentiis, and most of the technicians; Brit- ain sup.Plies one-third of the scriptwriters (H. A. L. Craig) and the second-line stars; and America throws in the international star- power and an editor, Richard Meyer, who would seem to have done more than anyone to keep the big, blurred giant moving for- wards. France, of course, collects la gloire.

In retrospect, Bondarchuk's War and Peace seems to have been mostly battles and balls. Here, the one ball is all dripping chandeliers and frozen Anglo-Saxon atti- tudes, and the one battle a confusion of spectacular aerial shots, romantic slow- motion calvary charges, mumbled high com- mand conferences and deafening artillery. Questions of terrain and tactics become sec- ondary to the impressionistic, panoramic, saturated style—that total too little that film- makers so easily achieve when their resources are resoundingly too much.

A very blond Russian, playing one Tom- linson of the Inniskillins, stumbles derang- edly out of the line to question the sanity of slaughter; at the end, Wellington rides over a darkened field of the dead. The film has slaughtered its thousands, and, without much imaginative impetus behind it, the de- cently pacific gesture is duly made. Christ- opher Plummer's Wellington is sharp and quizzical and lightweight; Rod Steiger's Bonaparte another of his brooding, heavily analysed solitaries and losers. As between a Napoleon who seems fatalistic for defeat, and a Wellington not quite equipped for winning, it's again a damned close-run thing.

There Was a Crooked Man . . . (Warner West End, `AA') is a picture of a tirelessly cynical cast, set mainly in an Arizona desert prison of the 1880s and concerning the de- vious relationship between Kirk Douglas's relentlessly conniving convict boss and Henry Fonda's blandly reformist prison governor. The script (by Bonnie and Clyde writers David Newman and Robert Benton) is con- fidently tricky, out to con the audience with quirky prison characters (Hume Cronyn and Burgess Meredith among the older inhab- itants) and laity violence shading into brute ferocity. The discovery that inside every lib- eral reformer lurks a booby or a rogue is one of current Hollywood's more predictable assumptions. But if smart callousness, moral indifference and violence on the rockpile are what you are looking for, at least this ex- ample is rather conspicuously well acted.

Produced by Tony Garnett and directed by Roy Battersby, The Body (Classic, Pic- cadilly, 'x') is a concerned but wayward amalgam of biology lesson and impression- istic, sociological moralising, a film which could be more instructive if its emphasis were less didactic. It shows us camera forays into the digestive system and magnified moon- crater landscapes of skin; sequences of birth and copulation (but not death, possibly the last frontier for virile film-makers); and a recurrent emphasis on sad, bossed-about sen- ility and that all-purpose symbol of machine monotony, the motor-car assembly line.

The over-all effect, which I suspect wasn't exactly intended, becomes rather like one of those Sunday supplement issues in which col- Spreads on the pumping mechanisms of e heart jostle confessional interviews with Napoleon Steiger in 'Waterloo'

the socially maimed. It's a context of some- what stunning stunning humourlessness and artifice, out of which Vanessa Redgrave's final plea for life and its forces emerges disconcert- ingly more bleat than trumpet-call.