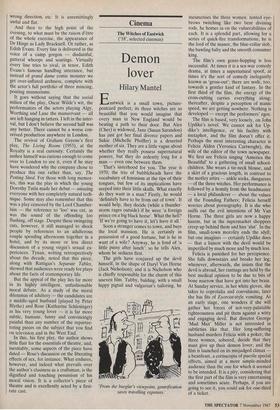 The Witches of Eastwick (`18', selected cinemas)

Eastwick is a small town, picture- postcard perfect; its three witches are so beautiful that you would imagine that every man in New England would be beating a path to their door. But Alex (Cher) is widowed, Jane (Susan Sarandon) has just got her final divorce papers and Sukie (Michelle Pfeiffer) is a deserted mother of six. They are a little vague about whether they really possess supernatural powers, but they do ardently long for a man — even one between them.

That's sisterhood for you. The year is 1970; the trio of bubbleheads have the vocabulary of feminism at the tips of their tongues, but few of its implications have seeped into their little skulls. What exactly do they want in a man? Firstly, he would `definitely have to be from out of town'. It would help, they decide (while a thunder- storm rages outside) if he were 'a foreign prince on a big black horse'. What the hell? `If we're going to have it, let's have it all.'

Soon a stranger comes to town, and buys the local mansion. He is certainly in possession of a good fortune, but is he in want of a wife? Anyway, he is fond of 'a little pussy after lunch': so he tells Alex, whom he seduces first.

The girls have conjured up the devil himself, in the shape of Daryl Van Horne (Jack Nicholson); and it is Nicholson who is chiefly responsible for the charm of this uneven film. Tubby, balding, with a small hippy pigtail and vulgarian's tailoring, he `From the burglar's viewpoint, gentrification saves travelling expenses.' mesmerises the three women. tented eye- brows twitching like two bent divining rods, he homes in on the vulnerabilities of each. It is a splendid part, allowing for a series of quick-fire transformations; he is the lord of the manor, the blue-collar slob, the bawling baby and the smooth consumer king.

The film's own genre-hopping is less successful. At times it is a sex-war comedy drama, at times a supernatural spoof, at times it's the sort of comedy inelegantly known as `gross-out'; there are nods, too, towards a gentler kind of fantasy. In the first third of the film, the energy of the cross-cutting carries everything along; thereafter, despite a perception of manic speed, we are getting nowhere. Nothing is developed — except the performers' egos.

The film is based, very loosely, on John Updike's novel. We cannot ask for Up- dike's intelligence, or his facility with metaphor, and the film doesn't offer it. Perhaps the most interesting character is Felicia Alden (Veronica Cartwright), the wife of the editor of the town newspaper. We first see Felicia singing 'America the Beautiful' to a gathering of small school- children. She wears a tie-neck blouse, and a skirt of a gracious length, in contrast to the motley attire — ankle socks, dungarees — of the three witches. Her performance is followed by a homily from the headmaster — a local philanderer — about the values of the Founding Fathers; Felicia herself worries about pornography. It is she who sniffs out the evil intentions of Mr Van Horne. The three girls are now a happy harem, but in the supermarket shoppers creep up behind them and hiss 'slut'. In the film, small-town morality ends the idyll; but one imagines — certainly Updike does — that a liaison with the devil would be imperilled by much more and by much less.

Felicia is punished for her percipience. She falls downstairs and breaks her leg; whenever, afterwards, she insists that the devil is abroad, her rantings are held by the best medical opinion to be due to bits of bone marrow that have got into her brain. At Sunday service, in her white gloves, she takes to coprolalia and convulsions; later she has fits of Exorcist-style vomiting. At an early stage, one wonders if she will gather her forces of not-very-palatable righteousness and pit them against a witty and engaging devil. But director George `Mad Max' Miller is not interested in subtleties like that. Her long-suffering husband murders Felicia with a poker; the three women, sobered, decide that they must give up their demon lover; and the film is launched on its misjudged climax a beanfeast, a cornucopia of puerile special effects, aimed at a more simple-minded audience than the one for which it seemed to be intended. It is a pity, considering that the first part of the film is very entertaining and sometimes acute. Perhaps, if you are going to see it, you could ask for one-third of a ticket.