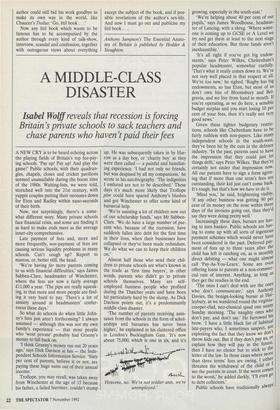 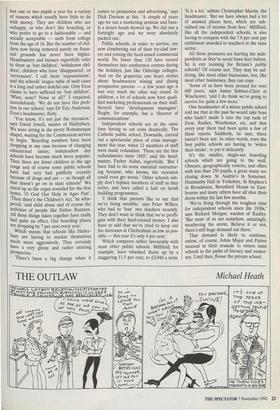 A NEW CRY is to be heard echoing across the playing fields of Britain's top fee-pay- ing schools. 'Pay up! Pay up! And play the game!' Public schools, with their quadran- gles, chapels, closes and cricket pavilions seemed unassailable during the boom time of the 1980s. Waiting-lists, we were told, stretched well into the 21st century, with yuppie couples putting their neonates down for Eton and Radley within nano-seconds of their birth.

Now, not surprisingly, there's a some- what different story. Many private schools face financial crisis, and some are finding it as hard to make ends meet as the average inner-city comprehensive.

Late payment of fees and, more and more frequently, non-payment of fees are causing serious liquidity problems in many schools. Can't cough up? Report to matron, or, better still, the head.

'We're having far more parents coming to us with financial difficulties,' says James Sabben-Clare, headmaster of Winchester, where the fees are now a fairly average £11,000 a year. 'The pips are really squeak- ing, in that more and more people are find- ing it very hard to pay. There's a lot of anxiety around at headmasters' confer- ences these days.'

So what do schools do when little John- ny's fees just aren't forthcoming? I always assumed — although this was not my own family's experience — that most people who 'went private' probably had Granny's money to fall back on.

`I think Granny's money ran out 20 years ago,' says Dick Davison at Isis — the Inde- pendent Schools Information Service. 'Sixty per cent of parents, believe it or not, are paying these huge sums out of their annual income.'

Trollope, you may recall, was taken away from Winchester at the age of 15 because his father, a failed barrister, couldn't stump up. He was subsequently taken in by Har- row as a day boy, or 'charity boy' as they were then called — a painful and humiliat- ing experience. 'I had not only no friends, but was despised by all my companions,' he wrote in his autobiography. 'The indignities I endured are not to be described.' These days it's much more likely that Trollope pere could have spared Anthony's blushes and got Winchester to offer some kind of bursarial help.

'We're assisting a lot of children now out of our scholarship funds,' says Mr Sabben- Clare. 'We do have a large number of par- ents who, because of the recession, have suddenly fallen into debt for the first time in their lives, when their businesses have collapsed or they've been made redundant. We do what we can to keep their children on.'

Almost half those who send their chil- dren to private schools are what's known in the trade as 'first time buyers', in other words, parents who didn't go to private schools themselves. Many are self- employed business people who profited during the Thatcher years and have been hit particularly hard by the slump. As Dick Davison points out, it's a predominantly middle-class disaster.

'The number of parents receiving assis- tance from the schools in the form of schol- arships and bursaries has never been higher,' he explained in his cluttered office in London's Buckingham Gate. 'It's now about 75,000, which is one in six, and it's 'Heavens, no. We're not soldier ants, we're unemployed.' growing, especially in the south-east.'

'We're helping about 40 per cent of our pupils,' says James Woodhouse, headmas- ter of Lancing, with a shrug. 'Where some- one is coming up to GCSE or A Level we try and get them at least to the next stage of their education. But those funds aren't inexhaustible.'

'It's all right if you've got big endow- ments,' says Peter Wilkes, Cheltenham's popular headmaster, somewhat ruefully. 'That's what it really comes down to. We're not very well placed in that respect at all. We're too new,' he sighed. 'Rugby has big endowments, so has Eton, but most of us don't own bits of Bloomsbury and Bel- gravia, and we live from hand to mouth. If you're operating, as we do here, a sensible budget surplus and you start losing 10 per cent of your fees, then it's really not very good news.'

Given these tighter budgetary restric- tions, schools like Cheltenham have to be fairly ruthless with non-payers. Like many independent schools in the south-west, they've been hit by the cuts in the defence industry. 'In the past, parents used to have the impression that they could just let things drift,' says Peter Wilkes. Tut they're certainly not under that impression now. All our parents have to sign a form agree- ing that if more than one term's fees are outstanding, their kid just can't come back. It's tough, but that's how we have to do it.

'Mind you,' he said, brightening visibly, 'if any other business was getting 90 Per cent of its money on the nose within three days of the invoices going out, then they'd say they were doing pretty well.'

Increasingly these days, bursars are hav- ing to turn banker. Public schools are hav- ing to come up with all sorts of ingenious payment schemes which would never have been considered in the past. Deferred pay- ment of fees up to three years after the child has left is catching on, as is monthly direct debiting — what one might almost call Tay-As-You-Learn'. Some are even offering loans to parents at a non-commer- cial rate of interest. Anything, as long as they get the readies in the end. 'The ones I can't deal with are the ones who don't communicate,' says Anthony Davies, the benign-looking bursar at Hal- leybury, as we wandered round the virginia- creeper-clad, neo-classical quad one sunnY Sunday morning. 'The naughty ones wil° don't pay, and don't say.' He furrowed ho brow. have a little black list of habitual late-payers who, I sometimes suspect, are exploiting the fact that they know we don t throw kids out. But if they don't pay us, or explain how they will pay in the future, then I have no choice but to stick to the letter of the law. In those cases where more than three terms' fees are owing, I either, threaten the withdrawal of the child or I see the parents in court. If the worst comes to the worst,' he added darkly, 'I'll even go to debt collectors.'

lost one or two pupils a year for a variety of reasons which usually have little to do with money. They are children who are unhappy, or who don't like boarding, or who prefer to go to a fashionable — and socially acceptable — sixth form college from the age of 16. But the number of chil- dren now being removed purely on finan- cial grounds has never been higher. Headmasters and bursars regretfully refer to them as `lost children', `withdrawn chil- dren', children who have `disappeared', or `severances'. I call them 'repossessions', and the schools' league table of such cases is a long and rather doleful one. Only Eton claims to have suffered no 'lost children'. 'What, none? None at all?' I enquired, incredulously. 'We do not have this prob- lem in our school,' says Dr Eric Anderson, Eton's headmaster, flatly.

'You know, it's not just the recession,' says David Jewell, master of Haileybury. We were sitting in the pretty Romanesque chapel, waiting for the Communion service to begin. 'Boarding numbers have been dropping in any case because of changing educational tastes; independent day schools have become much more popular. Then there are fewer children in the age range and of course some public schools have had very bad publicity recently because of drugs and sex — as though all that doesn't go on in state schools!' We stood up as the organ sounded for the first hymn, '0 God Our Help in Ages Past'. 'Then there's the Children's Act,' he whis- pered, 'and child abuse and of course the activities of people like Esther Rantzen. All these things taken together have really had quite an effect. Our boarding places are dropping by 7 per cent every year.' Which means that schools like Halley- bury are having to market themselves much more aggressively. They certainly have a very glossy and rather enticing prospectus.

'There's been a big change when it comes to promotion and advertising,' says Dick Davison at Isis. 'A couple of years ago we ran a marketing seminar and bare- ly a dozen heads showed up. We did one a fortnight ago and we were absolutely packed out.'

Public schools, in order to survive, are now clambering out of their ivy-clad tow- ers and joining the hard-nosed commercial world. No fewer than 120 have turned themselves into conference centres during the holidays, just like Oxbridge colleges. And on the grapevine one hears stories about headmasters wining and dining prospective parents — a few years ago it was very much the other way round. In addition, a lot of schools now have quali- fied marketing professionals on their staff. Several have 'development managers'; Rugby, for example, has a 'director of communications'.

Independent schools are at the same time having to cut costs drastically. The Catholic public school, Downside, carried out a spectacular piece of crisis manage- ment this year, when 12 members of staff were made redundant. 'These are the first redundancies since 1605,' said the head- master, Father Aidan, regretfully. 'But I have had to do some essential restructur- ing because, who knows, the recession could even get worse.' Other schools sim- ply don't replace members of staff as they retire, and have called a halt on lavish building programmes.

'I think that parents like to see that we're being sensible,' says Peter Wilkes, who had to 'lose' two teachers recently. They don't want to think that we're profli- gate with their hard-earned money. I also have to add that we've tried to keep our fee increases at Cheltenham as low as pos- sible — this year it's only 4 per cent.'

Which compares rather favourably with most other public schools. Millfield, for example, have whacked theirs up by a staggering 11.5 per cent, to £3,940 a term.

'It is a lot,' admits Christopher Martin, the headmaster. 'But we have always had a lot of assisted places here, which are sub- sidised out of income from fees.' Mil!field, like all the independent schools, is also having to compete with the 7.8 per cent pay settlement awarded to teachers in the state sector.

'Some of us have been around for over 600 years,' says James Sabben-Clare at Winchester, 'and I do think we're going to survive for quite a few more.'

One headmaster of a minor public school told me that in the past he would take boys who hadn't made it into the top rank of Eton, Radley, Winchester, etc, and that every year there had been quite a few of these rejects. Suddenly, he says, there haven't been any. In other words, even the best public schools are having to 'widen their intake', to put it delicately.

It's the smaller, single-sex boarding schools which are going to the wall. Obscure, geographically remote, and often with less than 250 pupils, a great many are closing down. St Audrie's in Somerset, Hunmanby Hall in Yorkshire, St Stephen's in Broadstairs, Beresford House in East- bourne and many others have all shut their doors within the last few months.

`We're living through the toughest time for independent schools since the 1930s,' says Richard Morgan, warden of Radley. 'But most of us are somehow, amazingly, weathering the storm. Believe it or not, there's still huge demand out there.'

That demand is likely to continue, unless, of course, Johns Major and Patten succeed in their crusade to return state schools to the paths of literacy and numer- acy. Until then, floreat the private school.