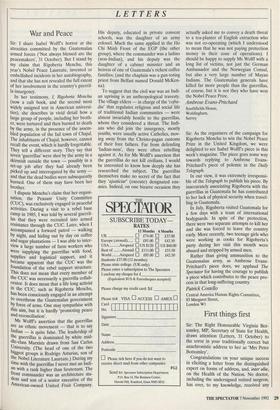 Page 29, 7 November 1992 — Sir: As the organisers of the campaign for Rigoberta Menchu
Close

Sir: As the organisers of the campaign for Rigoberta Menchu

to win the Nobel Peace Prize in the United Kingdom, we were delighted to see Isabel Wolff's piece in this week's magazine. The piece goes some way towards replying to Ambrose Evans- Pritchard's piece of polemic in the Daily Telegraph.

In our view, it was extremely irresponsi- ble of the Telegraph to publish his piece. By inaccurately associating Rigoberta with the guerrillas in Guatemala he has contributed to her lack of physical security when travel- ling in Guatemala.

In July, Rigoberta visited Guatemala for a few days with a team of international bodyguards. In spite of the protection, there were two separate attempts to kill her and she was forced to leave the country early. More recently, two teenage girls who were working as cooks for Rigoberta's party during her visit this month were abused and stripped by armed men.

Rather than giving ammunition to the Guatemalan army, as Ambrose Evans- Pritchard's piece does, we applaud The Spectator for having the courage to publish a piece which contributes to the peace pro- cess in that long-suffering country.