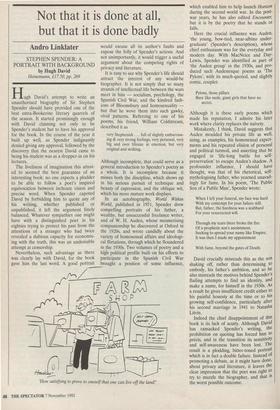 Not that it is done at all, but that it

STEPHEN SPENDER: A PORTRAIT WITH BACKGROUND by Hugh David Heinemann, £17.50, pp. 269 Hugh David's attempt to write an unauthorised biography of Sir Stephen Spender should have provided one of the best extra-Bookerine literary quarrels of the season. It started promisingly enough with David claiming not only to be Spender's student but to have his approval for the book. In the course of the year it built up well, as Spender indignantly denied giving any approval, followed by the discovery that the nearest David came to being his student was as a dropper-in on his

The liveliness of imagination this attest- ed to seemed the best guarantee of an interesting book: no one expects a plodder to be able to follow a poet's inspired equivocation between inchoate vision and precise word. When Spender capoted David by forbidding him to quote any of his writing, whether published or unpublished, it left the argument finely balanced. Whatever sympathies one might have with a distinguished poet in his eighties trying to protect his past from the attentions of a stranger who had twice revealed a dubious capacity for economis- ing with the truth, this was an undeniable attempt at censorship.

Nevertheless, such advantage as there was clearly lay with David, for the book gave him the last word. A good portrait would excuse all its author's faults and expose the folly of Spender's actions. And not unimportantly, it would trigger a useful argument about the competing rights of privacy and literature.

It is easy to see why Spender's life should attract the interest of any would-be biographer. It is not simply that so many strands of intellectual life between the wars meet in him — socialism, psychology, the Spanish Civil War, and the kindred fash- ions of Bloomsbury and homosexuality — but that he wove them into such gawky, vivid patterns. Referring to one of his poems, his friend, William Coldstream, described it as

Although incomplete, that could serve as a general introduction to Spender's poetry as a whole. It is incomplete because it misses both the discipline, which shows up in his serious pursuit of technique and beauty of expression, and the oblique wit, which his more mature work displays.

In an autobiography, World Within World, published in 1951, Spender drew compelling portraits of his father, a wealthy, but unsuccessful freelance writer, and of W. H. Auden, whose mesmerising companionship he discovered at Oxford in the 1920s, and wrote candidly about the variety of homosexual affairs and ideologi- cal flirtations, through which he floundered in the 1930s. Two volumes of poetry and a high political profile built on his efforts to participate in the Spanish Civil War brought a position of some influence, 'How satisfying to prove to oneself that one can live off the land!' which enabled him to help launch Horizon during the second world war. In the post- war years, he has also edited Encounter, but it is by the poetry that he stands or falls.

Here the crucial influence was Auden, 'the young, bow-tied, near-albino under- graduate' (Spender's description), whose chief enthusiasm was for the everyday and modern day. With MacNeice and Day Lewis, Spender was identified as part of 'the Auden group' in the 1930s, and pro- duced such Audenesque poems as 'The Pylons', with its much-quoted, and slightly comic, couplet:

Pylons, those pillars Bare like nude, giant girls that have no secret.

Although it is these early poems which made his reputation, I admire his later work where clarity replaces the naivety. Mistakenly, I think, David suggests that Auden moulded his private life as well, using, as examples, his homosexual experi- ments and his repeated elision of personal and political turmoil, and asserting that he engaged in life-long battle for self- preservation' to escape Auden's shadow. A profounder influence, I should have thought, was that of his rhetorical, self- mythologising father, who yearned unavail- ingly for fame. In his poem, 'The Public Son of a Public Man', Spender wrote:

When I left your funeral, my face was hard With my contempt for your failure still. But, father, the hardness was a scabbard For your resurrected will.

Through my tears there broke the fire Of a prophetic son's anointment.

Seeking to spread your name like Empire, It was then I made my appointment With fame, beyond the gates of Death.

David crucially misreads this as the son shaking off, rather than determining to embody, his father's ambition, and so he also misreads the motives behind Spender's flailing attempts to find an identity, and make a name, for himself in the 1930s. As a result he gives insufficient credit either to his painful honesty at the time or to his growing self-confidence, particularly after his second marriage in 1941 to Natasha Litvin.

Indeed the chief disappointment of this book is its lack of acuity. Although David has ransacked Spender's writing, the prohibition on quoting has forced him t o précis, and in the transition its sensitivity and self-awareness have been lost. The result is a plodding, bitter-toned portrait which is in fact a double failure. Instead of promoting a debate, as it might have done, about privacy and literature, it leaves the clear impression that the poet was right to try to muzzle the biographer, and that is the worst possible outcome.