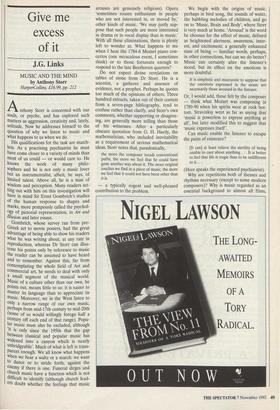 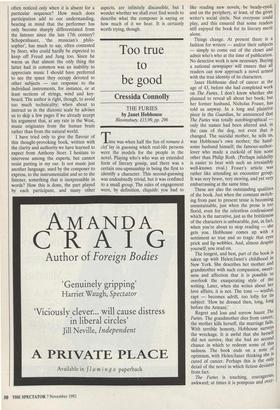 Give me excess of it

MUSIC AND THE MIND by Anthony Storr HamerCollins, £16.99, pp. 212 Anthony Storr is concerned with our souls, or psyche, and has explored such matters as aggression, creativity and, lately, solitude. Now he addresses himself to the question of why we listen to music and what happens to us when we do.

His qualifications for the task are match- less. As a practising psychiatrist he must have come closer to a variety of minds than most of us could — or would care to. He knows the work of many philo- sophers and he is not only a music lover but an instrumentalist, albeit, he says, of limited talent. Above all, he is a man of wisdom and perception. Many readers set- ting out with him on this investigation will have in mind Sir Ernst Gombrich's studies of the human response to shapes and marks, more pompously called the psychol- ogy of pictorial representation, in Art and Illusion and later essays.

Gombrich, whose survey ran from pre- Greek art to movie posters, had the great advantage of being able to show his readers What he was writing about, at any rate in reproduction, whereas Dr Storr can illus- trate his points only by reference to music the reader can be assumed to have heard and to remember. Against this, far from contemplating the whole field of Art and commercial art, he needs to deal with only a small segment of the musical world. Music of a culture other than our own, he Points out, means little to us: it is easier to master its language than to appreciate its music. Moreover, we in the West listen to only a narrow range of our own music, Perhaps from mid-17th century to mid-20th (some of us would willingly forego half a century off each end of that range). Popu- lar music must also be excluded, although it is only since the 1950s that the gap between classical and popular music has Widened into a canyon which is nearly unbridgeable'. Much of what is left is trans- parent enough. We all know what happens When we hear a waltz or a march: we want to dance or to stride forth, against the enemy if there is one. Funeral dirges and Church music have a function which is not difficult to identify (although church lead- ers doubt whether the feelings that music arouses are genuinely religious). Opera 'sometimes rouses enthusiasm in people who are not interested in, or moved by,' other kinds of music. 'We may justly sup- pose that such people are more interested in drama or in vocal display than in music.' With all these eliminations, there is plenty left to wonder at. What happens to me when I hear the 1784-6 Mozart piano con- certos (one miraculous event, I sometimes think) or to those fortunate enough to respond to the late Beethoven quartets?

Do not expect divine revelations on tables of stone from Dr Storr. He is a scientist, a gatherer and assessor of evidence, not a prophet. Perhaps he quotes too much of the opinions of others. Three hundred extracts, taken out of their context from a seven-page bibliography, tend to confuse rather than clarify, and Storr's own comments, whether supporting or disagree- ing, are generally more telling than those of his witnesses. After a particularly obscure quotation from G. H. Hardy, the mathematician, who included inevitability as a requirement of serious mathematical ideas, Storr notes that, paradoxically,

— a typically cogent and well-phrased contribution to the problem. We begin with the origins of music, perhaps in bird song, the sounds of water, the babbling melodies of children, and go on to 'Music, Brain and Body', where Storr is very much at home. 'Arousal' is the word he chooses for the effect of music, defined as heightened alertness, awareness, inter- est, and excitement; a generally enhanced state of being — familiar words, perhaps, in other connections, but can we do better? Music can certainly alter the listener's mood, but its effect on the emotions is more doubtful.

It is simplistic and inaccurate to suppose that the emotions expressed in the music are necessarily those aroused in the listener.

Or, I would add, those felt by the composer — think what Mozart was composing in 1789-90 when his spirits were at rock bot- tom. Stravinksy went as far as saying that 'music is powerless to express anything at all', but later modified this to suggest that 'music expresses itself'.

Can music enable the listener to escape the pains of existence?

[It can] at least relieve the sterility of being unable to care about anything . . . It is better to feel that life is tragic than to be indifferent to it ...

Why are repetitions both of themes and rhythms necessary (except to some modern composers)? Why is music regarded as an essential background to almost all films often noticed only when it is absent for a particular sequence? How much does participation add to our understanding, bearing in mind that the performer has only become sharply differentiated from the listener since the late 17th century? Schopenhauer, 'the musician's philo- sopher', has much to say, often contested by Storr, who could hardly be expected to keep off Freud and Jung too. Since he warns us that almost the only thing the latter had in common was an inability to appreciate music I should have preferred to see the space they occupy devoted to other subjects — our response to the individual instruments, for instance, or at least sections of strings, wind and key- board. The author is right, though, to avoid too much technicality; when about to instruct us in the diatonic scale he advises us to skip a few pages if we already accept his argument that, at any rate in the West, music originates from the human brain rather than from the natural world.

I have tried only to give the flavour of this thought-provoking book, written with the clarity and authority we have learned to expect from Anthony Storr. I hesitate to intervene among the experts, but cannot resist putting in my oar. Is not music just another language, used by the composer to express, to the instrumentalist and so to the listener, something that is inexpressible in words? How this is done, the part played by each participant, and many other aspects, are infinitely discussible, but I wonder whether we shall ever find words to describe what the composer is saying or how much of it we hear. It is certainly worth trying, though.