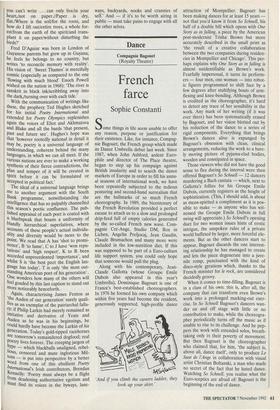 Some things in life seem unable to offer any reason, purpose or justification for their existence. Like, for instance, Compag- nie Bagouet, the French group which made its Dance Umbrella debut last week. Since 1987, when John Ashford, ardent Euro- phile and director of The Place theatre, began to step up his compaign against British insularity and to search the dance markets of Europe in order to fill his annu- al seasons of international work, we have been repeatedly subjected to the tedious posturing and second-hand surrealism that are the hallmarks of so much French choreography. In 1989, the bicentenary of the French Revolution provided a perfect excuse to attach us to a slow and prolonged drip-feed full of empty calories generated by the so-called French new wave. Corn- pagnie Cr6-Ange, Studio DM, Roc in Lichen, Angelin Preljocaj, Jean Gaudin, Claude Brumachon and many more were included in the low-nutrition diet. If this was supposed to be part of a Euro-culture life support system, you could only hope that someone would pull the plug.

Along with his contemporary, Jean- Claude Gallotta (whose Groupe Emile Dubois also appeared in this year's Umbrella), Dominique Bagouet is one of France's best-established choreographers. In 1976 he formed his own company which within five years had become the resident, generously supported, high-profile dance 'And if you climb the careers ladder, they look up your skirt.' attraction of Montpellier. Bagouet has been making dances for at least 15 years — not that you'd know it from So Schnell, his half of a double bill which opens with One Story as in falling, a piece by the American post-modernist Trisha Brown but more accurately described in the small print as 'the result of a creative collaboration between the two companies during residen- cies in Montpellier and Chicago'. This per- haps explains why One Story as in falling is almost unidentifiable as Brown's work. Fearfully impersonal, it turns its perform- ers — four men, one woman — into robot- ic figures programmed to shift face by a few degrees after stultifying bouts of arm- flexing and knee-bending. Although Brown is credited as the choreographer, it's hard to detect any trace of her sensibility in the work. Any mark of her writing (if it was ever there) has been systematically erased by Bagouet, and her vision blotted out by his reduction of the dance to a series of rigid components. Everything that brings Brown's dances alive is expunged by Bagouet's obsession with clean, clinical arrangements, reducing the work to a bare- ly moving picture of pyjama-clad bodies, wooden and constipated in space.

Those viewers who did not have the good sense to flee during the interval were then offered Bagouet's So Schnell — 12 dancers murdering a Bach cantata — which, next to Gallotta's follies for his Groupe Emile Dubois, currently registers as the height of sophistication. (This, I should add, is about as mean-spirited a compliment as it is pos- sible to make — as anyone who has wit- nessed the Groupe Emile Dubois in full swing will appreciate.) So Schnell's opening duet for two women issues hints of erotic intrigue, the unspoken rules of a private world buffeted by larger, more forceful ele- ments. But as the other dancers start to appear, Bagouet discards the one interest- ing relationship he has managed to create and lets the piece degenerate into a juve- nile romp, punctuated with the kind of disco-style gyrations which, thanks to the French minister for le rock, are considered decidedly groovy.

When it comes to time-filling, Bagouet is in a class of his own: this is, after all, the company that can transform even Brown's work into a prolonged marking-out exer- cise. In So Schnell Bagouet's dancers wan- der on and off stage with little or no contribution to make, while the choreogra- pher periodically turns off the music as if unable to rise to its challenge. And he pep- pers the work with extended solos, breath- taking only in their poverty of movement. But then Bagouet is the choreographer who claimed that, for him, 'the subject is, above all, dance itself', only to produce Le Saut de l'Ange in collaboration with visual artist Christian Boltanski, a man who made no secret of the fact that he hated dance. Watching So Schnell, you realise what the Euro-sceptics are afraid of: Bagouet is the beginning of the end of dance.