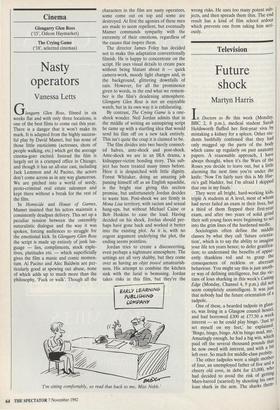 Glengany Glen Ross, filmed in six weeks flat and with only three locations, is one of the best films to come out this year. There is a danger that it won't make its mark. It is adapted from the highly success- ful play by David Mamet, but has none of those little exoticisms (actresses, shots of people walking, etc.) which get the average cinema-goer excited. Instead the film is largely set in a cramped office in Chicago, and though it has an all-star cast, including Jack Lemmon and Al Pacino, the actors don't come across as in any way glamorous. We are pitched into a world of seedy, proto-criminal real estate salesmen and kept there without a break for the rest of the film.

In Homicide and House of Games, Mamet insisted that his actors maintain a consistently deadpan delivery. This set up a peculiar tension between the ostensibly naturalistic dialogue and the way it was spoken, forcing audiences to struggle for the emotional kick. In Glengarry Glen Ross the script is made up entirely of junk lan- guage — lies, compliments, stock exple- tives, platitudes etc. — which superficially gives the film a manic and comic momen- tum. Al Pacino and Alec Baldwin are par- ticularly good at spewing out abuse, none of which adds up to much more than the philosophy, 'Fuck or walk'. Though all the characters in the film are nasty operators, some come out on top and some are destroyed. At first the agonies of these men are made to seem repellent, but eventually Mamet commands sympathy with the extremity of their emotions, regardless of the causes that inspire them.

The director James Foley has decided not to make this adaptation conventionally filmish. He is happy to concentrate on the script. He uses visual details to create pace without being blatant about it — quick camera-work, moody light changes and, in the background, glittering downfalls of rain. However, for all the prominence given to words, in the end what we remem- ber is the film's deadening atmosphere. Glengarry Glen Ross is not an enjoyable watch, but in its own way it is exhilarating.

By contrast, The Crying Game is a one- shock wonder. Neil Jordan admits that in the middle of writing an uninspiring script he came up with a startling idea that would send his film off on a new tack entirely. This isn't quite the coup it is claimed to be.

Ante-shock we are in an IRA drama, a kidnapper-victim bonding story. This sub- ject has been treated many times before.

Here it is despatched with little dignity.

Forest Whitaker, doing an amazing job passing himself off as an English squaddie, is the bright star giving this section promise, but unfortunately Jordan decides to waste him. Post-shock we are firmly in Mona Lisa territory, with racism and sexual hang-ups, but without Michael Caine or Bob Hoskins to ease the load. Having decided on his shock, Jordan should per- haps have gone back and worked it better into the existing plot. As it is, with no cogent argument underlying the plot, the ending seems pointless.

Jordan tries to create a disconcerting, even perhaps a nightmare atmosphere. The settings are all very shabby, but they come

over as having an objet trouve amateurish- ness. His attempt to combine the kitchen

sink with the lurid is bemusing. Jordan takes risks in this film, but they're the 'I'm sitting comfortably, so read that back to me, Miss Nebb.' wrong risks. He uses too many potent sub- jects, and then spreads them thin. The end result has a kind of film school ardour which prevents one from taking him seri- ously.