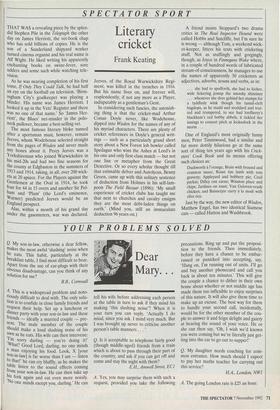 THAT WAS a revealing piece by the splen- did Stephen Pile in the Telegraph the other day on James Herriott, the vet-book chap who has sold billions of copies. He is the son of a Sunderland shipyard worker turned cinema organist and his real name is Alf Wight. He liked writing his apparently enchanting books on swine-fever, sore Udders and some such while watching tele- vision.

As he was nearing completion of his first tome, If Only They Could Talk, he had half an eye on the football on television. 'Birm- ingham City's goalkeeper was playing a blinder. His name was James Herriott. I looked it up in the Vets' Register and there was no one of that name.' So 'James Her- riott', the Blues' net-minder in the polo- neck pullover, became a best-selling vet.

The most famous literary bloke named after a sportsman must, however, remain Jeeves, whom Wodehouse selected straight from the pages of Wisden and never made any bones about it. Percy Jeeves was a Yorkshireman who joined Warwickshire in his mid-20s and had two fine seasons for the county at Edgbaston in the summers of 1913 and 1914, taking, in all, over 200 wick- ets at 20 apiece. For the Players against the Gentlemen at the Oval in 1914, he took four for 44 in 15 overs and another Sir Pel- ham and 'Plum' (the Lord's eminence, Warner) predicted Jeeves would be an England prospect. Alas, within a month of his grand day under the gasometers, war was declared. Jeeves, of the Royal Warwickshire Regi- ment, was killed in the trenches in 1916. But his name lives on, and forever will, resplendently, if not any more as a Player, indisputably as a gentleman's Gent.

In considering such fancies, the astonish- ing thing is that the cricket-mad Arthur Conan Doyle never, like Wodehouse, dipped into Wisden for the names of any of his myriad characters. There are plenty of cricket references in Doyle's general writ- ings — such as a particularly grand short story about a New Forest lob bowler called Spedague who wins the Ashes at Lord's in his one and only first-class match — but not one line or metaphor from the Great Detective. Or so every scholar thought till that estimable delver and Autolycus, Benny Green, came up with this solitary sentence of deduction from Holmes in his self-lam- poon The Field Bazaar (1896): 'My small experience of cricket clubs has taught me that next to churches and cavalry ensigns they are the most debt-laden things on earth.' (Mind you, still an immaculate deduction 96 years on.) A friend insists Stoppard's two drama critics in The Real Inspector Hound were called Hobbs and Sutcliffe, but I'm sure he is wrong — although Tom, a weekend wick- et-keeper, litters his texts with cricketing stuff. Not as stuffingly and gorgingly, though, as Joyce in Finnegans Wake where, in a couple of hundred words of lubricated stream-of-consciousness, he manages to use the names of apparently 30 cricketers as adjectives, adverbs, nouns and verbs, as in:

One of England's most originally funny men, Peter Tinniswood, had a similar and far more dottily hilarious go at the same sort of thing ten years ago with his Crick- eters' Cook Book and its menus offering such choices as:

Just by the way, the new editor of sden, Matthew Engel, has two identical Siamese cats — called Hutton and Washbrook.