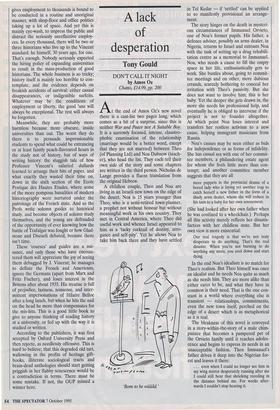 A lack of desperation

DON'T CALL IT NIGHT by Amos Oz Chatto, £14.99, pp. 200 At the end of Amos Oz's new novel there is a cast-list two pages long, which comes as a bit of a surprise, since this is neither War and Peace nor A Suitable Boy. It is a narrowly focused, intense, claustro- phobic examination of the relationship (marriage would be a better word, except that they are not married) between Theo (of Planning Ltd) and Noa Dubnow (teach- er), who head the list. They each tell their own side of the story and some chapters are written in the third person. Nicholas de Lange provides a fluent translation from the original Hebrew.

A childless couple, Theo and Noa are living in an Israeli new town on the edge of the desert. Noa is 15 years younger than Theo, who is a semi-retired town-planner, a prophet not without honour but without meaningful work in his own country. They met in Central America, where Theo did useful work and whence Israel appeared to him as a 'tacky cocktail of destiny, arro- gance and self-pity'. Yet he allows Noa to take him back there and they have settled 'Born to be wuut d.' in Tel Kedar — if 'settled' can be applied to so manifestly provisional an arrange- ment.

The story hinges on the death in mysteri- ous circumstances of Immanuel Orvieto, one of Noa's former pupils. His father, a defence adviser, possibly an arms dealer, in Nigeria, returns to Israel and entrusts Noa with the task of setting up a drug rehabili- tation centre as a memorial to Immanuel. Noa, who needs a cause to fill the empty space in her life, enthusiastically gets to work. She bustles about, going to commit- tee meetings and on other, more dubious errands, scarcely bothering to conceal her irritation with Theo's passivity. But she does not want to involve him; this is her baby. Yet the deeper she gets drawn in, the more she needs his professional help, and eventually he is obliged to intervene if the project is not to founder altogether. At which point Noa loses interest and transfers her restless activism to a new cause, helping immigrant musicians from Russia.

Noa's causes may be seen either as bids for independence or as forms of infidelity. She has casual sex with one of her commit- tee members, a philandering estate agent for whom she feels little more than con- tempt; and another committee member suggests that they are all

mere puppets in the provincial drama of a bored lady who is laying yet another trap to catch herself a new father in the form of a shady arms dealer, whom she will reduce in his turn to a baby for her own amusement.

(She had looked after her own father when he was confined to a wheelchair.) Perhaps all this activity merely reflects her dissatis- faction with her childless state. But her own view is more existential:

Our real tragedy is that we're not truly desperate to do anything. That's the real disaster. When you're not burning to do anything any more, you cool down and start dying.

In the end Noa's idealism is no match for Theo's realism. But Theo himself was once an idealist and he needs Noa quite as much as she needs him. They are more alike than either cares to be, and what they have in common is their need. That is the one con- stant in a world where everything else is transient — relationships, commitments, even the new town itself, perched on the edge of a desert which is as metaphorical as it is real.

The bleakness of this novel is conveyed in a story-within-the-story of a male chim- panzee that becomes a pampered pet of the Orvieto family until it reaches adoles- cence and begins to express its needs in an unacceptable fashion. Then Immanuel's father drives it deep into the Nigerian for- est and leaves it there:

... even when I could no longer see him in my wing mirror desperately running after me I could still hear that shrieking receding in the distance behind me. For weeks after- wards I couldn't stop hearing it.