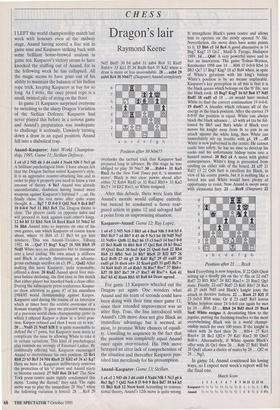 I LEFT the world championship match last week with honours even at the midway stage, Anand having scored a fine win in game nine and Kasparov striking back with some brilliant home-brewed analysis in game ten. Kasparov's victory seems to have knocked the stuffing out of Anand, for in the following week he has collapsed. All the magic seems to have gone out of his ability to maintain the balance of his Indian rope trick, keeping Kasparov at bay for so long. As I write, the once proud rope is a small, twisted pile of string on the floor.

In game 11 Kasparov surprised everyone by switching to the sharp Dragon Variation of the Sicilian Defence. Kasparov had never played this before in a serious game and Anand's preparation was inadequate to challenge it seriously. Unwisely turning down a draw in an equal position, Anand fell into a diabolical trap.

1 ezt c5 2 Nf3 d6 3 d4 cxd4 4 Nxd4 Nf6 5 NO g6 A brilliant psychological blow. I have always felt that the Dragon Sicilian suited Kasparov's style. It is an aggressive counter-attacking line and in order to play it properly you need to know a vast amount of theory. 6 Be3 Anand was already uncomfortable, doubtless having honed more weapons against Kasparov's habitual 5 a6. He finally chose the text move after quite some thought. 6 ...Bg7 7 f3 0-0 8 Qd2 Nc6 9 Bc4 Bd7 10 0-0-0 Ne5 11 Bb3 Rc8 The Dragon theme is clear. The players castle on opposite sides and will proceed to hack against each other's kings. 12 h4 h5 13 Kbl Nc4 14 Bxc4 Rxc4 15 Nde2 b5 16 Bh6 Anand tries to improve on one of his own games, one which Kasparov of course knew about, where 16 Bd4 e5 17 Be3 b4 got him nowhere. This was Anand—Tiviakov, Tilburg 1992. 16 ... Qa5 17 Bxg7 Kxg7 18 Nf4 Rfc8 19 Ncd5 White sees no alternative but to transpose into a level ending. His own attack is stillborn and Black is already threatening an advanta- geous exchange sacrifice on c3. 19 ...Qxd2 After making this move Kasparov, quite reasonably, offered a draw. 20 Rxd2 Anand spent four min- utes before declining, the first time in this match that either player has knocked back a draw offer. During the subsequent press conference Kaspar- ov drew attention to game 47 of his marathon 1984/85 world championship against ICarpov. Kasparov said during the course of an interview which at times bore the ecstatic overtones of a Roman triumph: 'It gave me pleasant memories of a previous world chess championship game in which I offered Karpov a draw in a level posi- tion. 1Carpov refused and then I went on to win.' 20 ... Nxd5 21 Nxd5 Kf8 It is quite reasonable to defend the e7 pawn, but Kasparov soon starts to complicate the issue by allowing White to take it in certain variations. This kind of psychological play reminds me strongly of Emanuel Lasker. By continually offering bait, Kasparov encouraged Anand to overestimate his own position. 22 Rel Rb8 23 b3 Rc5 24 Nf4 Rbc8 25 Kb2 a5 26 a3 Kg7 Here we have it. Kasparov deliberately removes the protection of his `e' pawn and Anand starts to become excited. 27 Nd5 Be6 28 b4? The New York press centre quite rightly condemned this move. 'Losing the thread,' they said. The right move was to play the immediate 28 Nxe7 when the following variation is forced: 28 ... Re8 29

After this debacle, there were fears that Anand's morale would collapse entirely, but instead he conducted a fierce rear- guard action in game 12 and salvaged half a point from an unpromising situation.

For game 13 Kasparov wheeled out the Dragon yet again. One wonders what Anand and his team of seconds could have been doing with their time since game 11, since their intended improvement was an utter flop. True, the line introduced with Anand's 12th move does not give Black an immediate advantage but it seemed, at most, to promise White chances of equali- ty. Unwilling to acquiesce in the fact that the position was completely equal Anand once again over-reacted. His 19th move betrayed an utter lack of comprehension of the situation and thereafter Kasparov pun- ished him mercilessly for his presumption.

In game 14, Arland continued his losing ways, so I expect next week's report will be the final one.