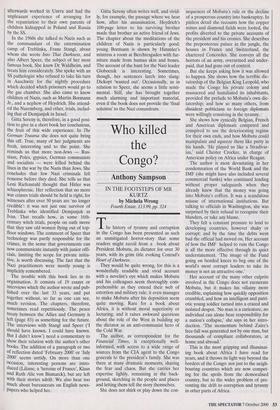 Who killed the Congo?

IN THE FOOTSTEPS OF MR KURTZ by Michela Wrong Fourth Estate, £13.99, pp. 324 The history of tyranny and corruption in the Congo has been presented as such an unmitigated horror-story that some readers might recoil from a book about President Mobutu, its dictator for over 30 years, with its grim title evoking Conrad's Heart of Darkness.

They would be quite wrong, for this is a wonderfully readable and vivid account with a novelist's eye which makes Mobutu and his colleagues seem thoroughly com- prehensible as they extend their web of extortion and military rule: it even manages to make Mobutu after his deposition seem quite moving. Rare for a book about Africa, it is without moral superiority or lecturing; and it raises awkward questions about the role of the West in building up the dictator as an anti-communist hero of the Cold War.

The author, as correspondent for the Financial Times, is exceptionally well- informed, with access to a wide range of sources from the CIA agent to the Congo generals to the president's family. She was there at many dramatic moments, sharing the fear and chaos. But she carries her expertise lightly, remaining in the back- ground, sketching in the people and places and letting them tell the story themselves.

She does not shirk or play down the con- sequences of Mobutu's rule or the decline of a prosperous country into bankruptcy. In pitiless detail she recounts how the copper mines and diamond fields were looted, the profits diverted to the private accounts of the president and his cronies. She describes the preposterous palace in the jungle, the houses in France and Switzerland, the chartered Concordes. She conveys all the horrors of an army, overarmed and under- paid, that had gone out of control.

But she keeps asking how it was allowed to happen. She shows how the terrible dic- tatorship of the Belgian King Leopold, who made the Congo his private colony and massacred and humiliated its inhabitants, provided the prelude to Mobutu's own dic- tatorship; and how so many others, from dissident politicians to foreign diplomats were willingly conniving in the tyranny.

She shows how cynically Belgian, French and American diplomats competed and conspired to use the deteriorating regime for their own ends, and how Mobutu could manipulate and squeeze them like putty in his hands. 'He played us like a Stradivar- ius,' said Chester Crocker, in charge of American policy on Africa under Reagan.

The author is most devastating in her condemnation of the World Bank and the IMF (she might have also included several commercial banks) who continued lending without proper safeguards when they already knew that the money was going into Mobutu's coffers. It was a scandalous misuse of international institutions. But talking to officials in Washington, she was surprised by their refusal to recognise their blunders, or take any blame.

They felt a constant pressure to lend to developing countries, however shaky or corrupt; and by the time the debts went bad the official had moved on. Her account of how the IMF helped to ruin the Congo is all the more effective through its quiet understatement. 'The image of the Fund going on bended knees to beg one of the world's most corrupt leaders to take its money is not an attractive one.'

Her account of the many other culprits involved in the Congo does not exonerate Mobutu, but it makes his villainy more credible, explaining how quickly opposition crumbled, and how an intelligent and patri- otic young soldier turned into a crazed and isolated despot. 'No man is a caricature, no individual can alone bear responsibility for a nation's collapse,' she says in her intro- duction. 'The momentum behind Zaire's free-fall was generated not by one man, but thousands of compliant collaborators, at home and abroad.'

This is the most gripping and illuminat- ing book about Africa I have read for years, and it throws its light way beyond the borders of the Congo: not just to the neigh- bouring countries which are now compet- ing for the spoils from the demoralised country, but to the wider problem of pre- venting the drift to corruption and tyranny in other parts of Africa.