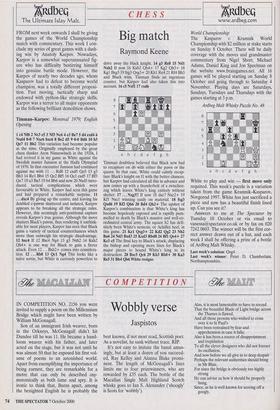 FROM next week onwards I shall be giving the games of the World Championship match with commentary. This week I con- clude my series of great games with a dash- ing win by Anatoly Karpov. Nowadays, Karpov is a somewhat superannuated fig- ure who has difficulty bestirring himself into genuine battle mode. However, the Karpov of nearly two decades ago, whom Kasparov had to defeat to become world champion, was a totally different proposi- tion. Fast moving, tactically sharp and endowed with python-like strategic skills, Karpov was a terror to all major opponents as the following brilliant demolition shows.

Timman–Karpov: Montreal 1979; English Opening 1 c4 Nf6 2 Nc3 e5 3 Nf3 Nc6 4 e3 Be7 5 d4 exd4 6 Nxd4 0-0 7 Nxc6 bxc6 8 Be2 d5 9 0-0 Bd6 10 b3 Qe7 11 Bb2 This variation had become popular at the time. Originally employed by the great chess thinker Aron Nimzowitsch in the 1920s, I had revived it in my game as White against the Swedish master Jansson at the Haifa Olympiad of 1976. In that encounter Jansson had continued against me with 11 Rd8 12 cxd5 Qe5 13 g3 Bh3 14 Rel Bb4 15 Qc2 Bf5 16 Qcl cxd5 17 Bf3 Qe7 18 a3 Ba5 19 b4 Bb6 and now 20 Nxd5 intro- duced tactical complications which were favourable to White. Karpov had seen this game and had prepared a remarkable surprise. 11 dxc4 By giving up the centre, and leaving his doubled c-pawns shattered and isolated, Karpov appears to be breaking all the strategic rules. However, this seemingly anti-positional capture reveals Karpov's true genius. Although the move shatters Black's pawns, thus rendering it unthink- able for most players, Karpov has seen that Black gains a variety of tactical counterchances which more than outweigh his strategic disadvantage. 12 bxc4 If 12 Bxc4 Ng4 13 g3 Nxh2 14 Kxh2 is one way for Black to gain a fierce attack. Even 12 ... Bxh2+ comes into considera- tion. 12 ... R68 13 Qcl Ng4 This looks like a naive sortie, but White is curiously powerless to drive away the black knight. 14 g3 Re8 15 Ndl Nxh2 If now 16 Kxh2 Qh4+ 17 Kg2 Qh3+ 18 Kg' Bxg3 19 fxg3 Qxg3+ 20 Kh1 Re4 21 Rf4 Bh3 and Black wins. Timman finds an ingenious counter, but Karpov had also taken this into account, 16 c5 Nxfl 17 cxd6 Timman doubtless believed that Black now had to recapture on d6 with either the pawn or the queen. In that case, White could calmly recap- ture Black's knight on fl with the better chances, but Karpov had calculated all this in advance and now comes up with a thunderbolt of a zwischen- zug which leaves White's king entirely without shelter. 17 ... Nxg3!! If now 18 dxe7 Nxe2+ 19 Kfi Nxcl winning easily on material. 18 fxg3 Qxd6 19 Ka Qh6 20 Bd4 Qh2+ The upshot of Karpov's combination is that White's king has become hopelessly exposed and is rapidly pum- melled to death by Black's massive and well-co- ordinated central army. The square h2 has defi- nitely been White's nemesis, or Achilles heel, in this game. 21 Kel Qxg3+ 22 Kd2 Qg2 23 Nb2 Ba6 24 Nd3 Bxd3 25 Kxd3 Rbd8 26 Bfl Qe4+ 27 Kc3 c5 The final key to Black's attack, displacing the bishop and opening more lines for Black's major pieces to hound White's king to its destruction. 28 BxcS Qc6 29 Kb3 Rb8+ 30 Ka3 Re5 31 Bb4 Qb6 White resigns World Championship The Kasparov v. Kramnik World Championship with $2 million at stake starts on Sunday 8 October. There will be daily coverage with the moves and grandmaster commentary from Nigel Short, Michael Adams, Daniel King and Jon Speelman on the website www.braingames.net. All 16 games will be played starting on Sunday 8 October and going through to Saturday 4 November. Playing days are Saturdays, Sundays, Tuesdays and Thursdays with the games starting at 3 p.m.

Ardbeg Malt Whisky Puzzle No. 48 White to play and win — first move only required. This week's puzzle is a variation taken from the game Kramnik–Kasparov, Novgorod 1997. White has just sacrificed a piece and now has a beautiful finish lined up. Can you see it?

Answers to me at The Spectator by Tuesday 10 October or via email to vanessa@spectator.co.uk or by fax on 020 7242 0603. The winner will be the first cor- rect answer drawn out of a hat, and each week I shall be offering a prize of a bottle of Ardbeg Malt Whisky. Last week's solution: Qxg4