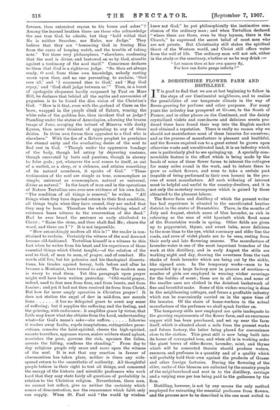 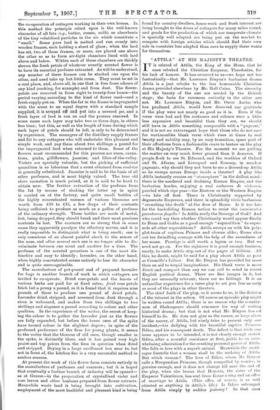 A DORSETSHIRE FLOWER FARM AND DISTILLERY.

T T is good to find that we are at last beginning to follow in the steps of our Continental neighbours, and to realise the possibilities of our temperate climate in the way of flower-growing for perfume and other purposes. For many years the industry has prospered at Grasse, in the South of France, and in other places on the Continent, and the dainty crystallised violets and rose-leaves and delicious scents pro- duced• there have found their way into the English market and obtained a reputation. There is really no reason why we should not manufacture most of these luxuries for ourselves; and as the process of manufacture is pleasant and healthful, and the flowers required can to a great extent be grown upon otherwise waste and uncultivated land, it is an industry which one is particularly glad to see springing up. A specially com- mendable feature is the effort which is being made by the heads of some of these flower farms to interest the cottagers for many miles round in the work, and to induce them to grow or collect flowers, and even to take a certain part (capable of being performed in their own homes) in the pro- cess of scent manufacture. All such widening of interest must be helpful and useful to the country-dwellers, and it is not only the monetary recompense which is gained by those attracted to the pleasant labour.

The flower farm and distillery of which the present writer has had experience is situated in the uncultivated heather district in the centre of Dorsetshire. There, in the months of July and August, stretch acres of blue lavender, as rich in colouring as the seas of wild hyacinth which flood some of the Dorsetshire woods in spring. Other fields are given up to peppermint, thyme, and sweet balm, more delicious to the nose than to the eye, whilst rosemary and elder line the roads, and rows of violet plants are to be seen, resting from their early and late flowering seasons. The manufacture of lavender-water is one of the most important branches of the work at this distillery, and in early August the stills are working night and day, drawing the sweetness from the vast stacks of fresh lavender which are being cut by the sickle, like ripened corn. In the temporary works—soon to be superseded by a large factory now in process of erection—a number of girls are employed in weaving wicker coverings for the bottles of scent ; these are in all sizes, and some of the smaller ones are clothed in the daintiest basketwork of fine and beautiful make. Some of this wicker-weaving is done in the neighbouring cottages, and forms a profitable industry which can be conveniently carried on in the spare time of the inmates. Of the share of home-workers in the actual manufacture of the perfumes we shall speak further on.

The temporary stills now employed are quite inadequate to the growing requirements of the flower farm, and an enormous copper still has been purchased, and set up near the farm itself, which is situated about a mile from the present works and future factory, the latter being placed for convenience close to the station. This great still is now being built into its house of corrugated iron, and when all is in working order the giant brews of elder-flower, lavender, mint, and thyme which will be concocted therein should produce waters, essences, and perfumes in a quantity and of a quality which will probably hold their own against the products of Grasse and other foreign factories. During the flowering of the elder, sacks of this blossom are collected by the country people of the neighbourhood and sent in to the distillery, carriage and a varying sum per ton being paid to the gatherers by the firm.

Distilling, however, is not by any means the only method employed for extracting the essential perfumes from flowers, and the process now to be described is the one most suited to

the co-operation of cottagers working in their own homes. hi this method the principle relied upon is the well-known character, of all fats (e.g., butter, cream, milk) as absorbents of the tiny volatilised particles in the air which constitute a "smell." Some pure lard is melted and run evenly into wooden frames, each holding a sheet of glass; when the lard has set, two of these frames, or more, are placed one above the other so as to form air-tight chambers lined with lard above and below. Within each of these chambers are thickly strewn the fresh petals of whatever sweetly scented flower is to have its essential perfume extracted. As will be understood, any number of these frames can be stacked one upon the other, and need take up but little room. They must be set in a cool place, and, above all, in one that is free from odours of any kind (cooking, for example) and from dust. The flower- petals are removed in from eight to twenty-four hours—the period varying according to the kind of flower used—and a fresh supply put on. When the fat in the frame is impregnated with the scent to an equal degree with a standard sample supplied, it is scraped off and put into a covered jar, and a fresh layer of lard is run on and the process renewed. In some cases each layer may take two or three days, in others less time; but this, as well as the length of time during which each layer of petals should be left, is only to be determined by experience. The managers of the distillery supply frames and fat to any cottagers who will undertake this pleasant and simple work, and pay them about two shillings a pound for the impregnated lard when returned to them. Some of the flowers most recommended for this process are roses, carna- tions, pinks, gilliflowers, jasmine, and lilies-of-the-valley. Violets are specially valuable, but the picking of sufficient quantities is so laborious that a scent obtained from coal-tar is generally substituted. Jasmine is said to be the basis of all other perfumes, and is most highly valued. The true old clove carnation is much prized, as it is said to be bard to obtain now. The further extraction of the perfume from the fat by means of shaking the latter up in spirit is carried on at the factory, and quite small bottles of the highly concentrated essence of various blossoms are worth from £10 to i15, a few drops of their contents being sufficient to produce as much as a gallon of perfume of the ordinary strength. These bottles are made of metal, lest, being dropped, they should break and their most precious contents be lost. The essences are so strong that in some cases they apparently paralyse the olfactory nerves, and it is really impossible to distinguish what is being smelt; one is only conscious of, an almost painful shock to the senses of the nose, and after several such one is no longer able to dis- criminate between one scent and another for a time. The perfume of the scented geranium is one of the most dis- tinctive and easy to identify ; lavender, on the other hand, when highly concentrated seems entirely to lose its character and is quite unrecognisable.

The manufacture of pot-pourri and of prepared lavender for bags is another branch of work in which cottagers are invited to co-operate. Dried rose-petals and the leaves of various herbs are paid for at fixed rates; fresh rose petals fetch but a penny a pound, as it is found that it requires nine Pounds of these to produce one pound of dried petals. Lavender dried, stripped, and screened from dust through a sieve is welcomed, and makes from two shillings to two shillings and sixpence a pound according to colour and other qualities. In the experience of the writer, the secret of keep- ing the colour is to gather the lavender just as the flowers are fully expanded, but before the lower ones of the spike have turned colour in the slightest degree; in spite of the professed preference of the firm for young plants, it seems to the writer that the blossom of old ones, though smaller in the spike, is distinctly bluer, and it has gained very high praise and top prices from the firm in question when dried and stripped. Drying in a large cardboard box near to, but not in front of, the kitchen fire is a very successful method in sunless seasons.

At present the work of this flower farm consists entirely in the manufacture of perfumes and essences ; but it is hoped that eventually a further branch of industry will be opened— as at Grasse—in the preparation of crystallised violet and rose leaves and other bonbons prepared from flower extracts. Meanwhile waste land is being brought into cultivation, employment of the most healthful and pleasant kind is being found for country-dwellers, home-work and fresh interest are being brought to the doors of cottagers for many miles round, and goods for the production of which our temperate climate is specially well adapted are being put on the market to compete with foreign articles which should find their own sale in countries less adapted than ours to supply these wants for themselves.