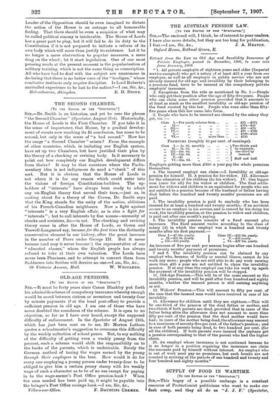 [To THE EDITOR OF THE " $PECTATOR:] SIR,—/t must be forty years since Canon Blackley put forth his admirable scheme of compulsory insurance whereby enough would be saved between sixteen or seventeen and twenty-four by minute payments (? at the local post-office) to provide a sufficient pension in old age. I am one of those who have never doubted the soundness of the scheme. It is open to no objection, so far as I have ever heard, except the supposed difficulty of enforcement. In the Spectator of August 24th, which has just been sent on to me, Mr. Morton Latham quotes a schoolmaster's suggestion to overcome this difficulty by the weekly collection of school pence. But, to say nothing of the difficulty of getting even a weekly penny from the poorest, such a scheme would shift the responsibility on to the backs of the parents, which is undesirable. Surely the German method of taxing the wages earned by the young through their employers is the best. How- would it do for every one employing a young person under twenty-four to be obliged to give him a certain penny stamp with his weekly

wage of such a character as to be of no use except for paying in to the wage-earner's Post Office pension-book ? When the sum needed has been paid up, it might be payable into the bringer's Post Office sav,ings-book.—I am, Sir, &c.,