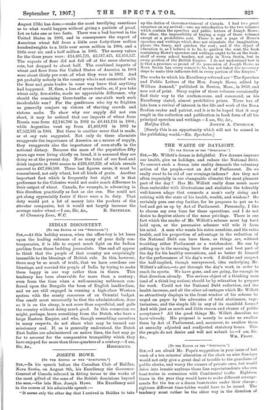 [To THE EDITOR Of THE "SPECTATOR."]

Sm,—In his speech before the Canadian Club of Halifax, Nova Scotia, on August 8th, his Excellency the Governor- General of Canada referred in fitting terms to the works of the most gifted of the sons of the British dominions beyond the seas,—the late Hon. Joseph Howe. His Excellency said in the course of his admirable speech :- "It seems only the other day that I arrived in Halifax to take

up the duties of Governor-Ueneral of Canada. I had two great surprises on my arrival,—one, my introduction to the two volumes which contain the speeches and public letters of Joseph Howe ; the other, the impossibility of buying a copy of those volumes except at a prohibitive cost. There is not a page of Howe's speeches and writings which does not stimulate the imagination, please the fancy, and quicken the soul ; and if the object of education is, as I believe it to be, to quicken the soul, the book containing Howe's speeches and writings ought to be on the book- shelf of every school teacher, not only in Nova Scotia, but in every portion of the British Empire. I do not understand bow it is that a province so proud of its possession of Joseph Howe. as Nova Scotia has every reason to be, has not taken the necessary steps to make this influence felt in every portion of the Empire."

The works to which his Excellency referred are " The Speeches and Public Letters of the Hon. Joseph Howe, edited by William Annand," published in Boston, Mass., in 1859, and now out of print. Stray copies of those volumes occasionally find their way to the auction-room, and command, as his Excellency stated, almost prohibitive prices. There has of late been a revival of interest in the life and work of the Nova Scotian orator and patriot, and it is to be hoped that it may resplt in the collection and publication in book form of all his principal speeches and writings.—I am, Sir, Ste., Halifax Club. JOSEPH A. CHIsHour. [Surely this is an opportunity which will not be missed in the publishing world.—En. Spectator.]