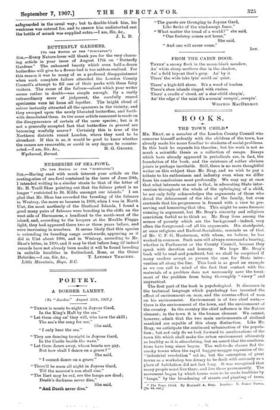 LTO TUX EDITOR OV TUX spscrAToicl Sin,—Having read with much interest your article on the nesting-sites of sea-fowl contained in the issue of June 29th, I intended writing in a similar strain to that of the letter of Mr. H. Trail Skae pointing out that the fulmar petrel is no longer "restricted to St. Kilda amongst our islands." 1 am glad that Mr. Skae has recorded the breeding of the fulmars in Westray, the more so because in 1898, when I was in North Uist, the most northerly of the Shetland Islands, I found a good many pairs of fulmars were breeding in the cliffs on the west side of Hermaness, a headland to the north-west of the "island, and, according to the keepers at the Muckle Flugga light, they had appeared there two or three years before, and were increasing in numbers. It seems likely that this species is extending its breeding range southwards, appearing as it did in Uist about 1896, and in Westray, according to Mr. Skae's letter, in 1899, and it may be that before long (if indeed records have not already been made) it will be found breeding in suitable localities in Sutherland, Ross, or the Outer Hebrides.—I am, Sir, &c., T. LINDSAY THACKER. Little Mountain, Hope, B.C.