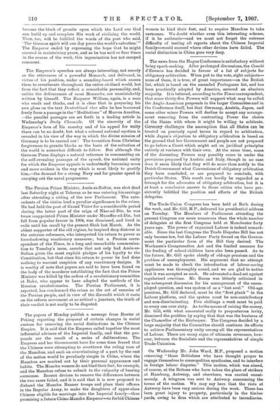 Page 2, 7 September 1907 — The news from the Hague Conference is satisfactory without being
Close

The news from the Hague Conference is satisfactory without being

epoch-making. After prolonged discussions, the Comito d'Examen has decided in favour of a list of subjects for obligatory arbitration. When put to the vote, eight subjects— none of them, it is true, of great importance—on the British list, which is based on the amended Portuguese list, and has been practically adopted by America, secured an absolute majority. It is believed, according to the Times correspondent, that some thirty-five Powers will support what may be called the Anglo-American proposals in the larger Committee and in the Conference itself, but that Germany, Austria, Japan, and some other minor Powers will decline to accept any.arrange- ment removing from the contracting Power the choice of the States with whom it might be willing to arbitrate. Germany challenges the assumption that all states can be treated on precisely equal terms in regard to arbitration, while Japan's objection to obligatory arbitration is based on the ground that her Government and people are not prepared to go before a Court which might act on juridical principles entirely at variance with their own. At the same time, some of the dissenting Powers may possibly come in under the provisions proposed by Austria and Italy, though in no case does it seem likely that they will do more than notify to the Dutch Government what Conventions of obligatory arbitration they have concluded, or are prepared to conclude, with particular States. This result can hardly be regarded as a triumph for the advocates of obligatory arbitration, but it is at least a conclusive answer to those critics who have per- sistently belittled the position and efforts of the British delegates.