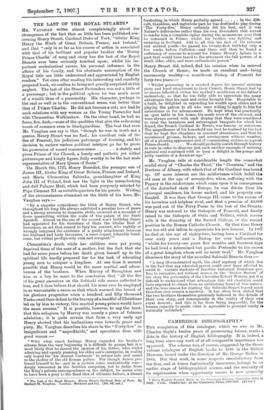 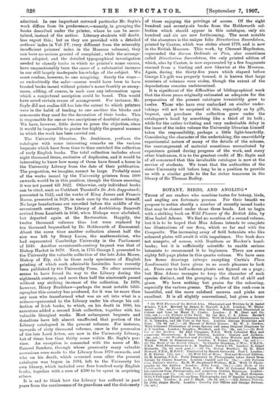 Page 19, 7 September 1907 — CAMBRIDGE BIBLIOGRAPHY.* TnE completion of this catalogue, which we owe
Close

CAMBRIDGE BIBLIOGRAPHY.* TnE completion of this catalogue, which we owe

to Mr. Charles Sayle's twelve years of persevering labour, marks a date in the history of English bibliography. It is, indeed, a long time since any work of at all comparable importance has appeared. The scheme was, of course, suggested by the three- volume catalogue of English books to 1640 in the British Museum, issued under the direction of Mr. George Bullet' in 1884. But that work, in some respects unsatisfactory from the first, and at times fantastically inaccurate, belongs to an earlier stage of bibliographical science, and the necessity of its supersession when opportunity occurs is now generally

• Early English Printed Books in the Ilniversaty Library, Cambridge (ISM to 1640). 4 vols. Cambridge : at the University Press, 1900-1907. [1.3 net.] admitted. In one important outward particular Mr. Sayle's work differs from its predecessor,—namely, in grouping the books described under the printer, where he can be ascer- tained, instead of the author. Literary students will doubt- less regret this ; but as they are provided with a detailed authors' index in Vol. IV. (very different from the miserably insufficient printers' index in the Museum volumes), they can have no serious ground of complaint ; while the arrange- ment adopted, and the detailed typographical investigation needed to classify books in which no printer's name occurs, have unquestionably been the cause of a substantial increase in our still largely inadequate knowledge of the subject. We must confess, however, to one misgiving. Surely the wiser— as undoubtedly the safer—course would have been to have treated books issued without printer's name frankly as anony- mous, adding, of course, in each case any information upon which a conjectural ascription could be based. This would have saved certain errors of arrangement. For instance, Mr. Sayle did not realise till too late the extent to which printers were in the habit of lending to one another the blocks and ornaments they used for the decoration of their books. This is responsible for one or two ascriptions of doubtful authority. We have, however, little desire to press the objection, since it would be impossible to praise too highly the general manner in which the work has been carried out.

The University librarian, Dr. Jenkinson, prefaces the catalogue with some interesting remarks on the various bequests which have from time to time enriched the collection of early English books. The total collection includes about eight thousand items, exclusive of duplicates, and it would be interesting to know how many of these have found a home in the University Library from the date of their publication. The proportion, we imagine, cannot be large. Probably most of the works issued by the University printers from 1600 onwards would be in this position, though the Grace ensuring it was not passed till 1622. Otherwise, only individual books can be cited, such as Cuthbert Tunstall's De Arts Supputandi, presented in 1522, and the works of King James and Francis Bacon, presented in 1620, in each case by the author himself. No large benefactions are recorded before the middle of the seventeenth century. The Library of Archbishop Bancroft arrived from Lambeth in 1616, when Bishops were abolished, but departed again at the Restoration. Happily, the twelve thousand volumes thus lost were replaced by ten thousand bequeathed by Dr. Holdsworth of Emmanuel. About the same time another collection almost half the size was left by Henry Lucas, the mathematician, who had represented Cambridge University in the Parliament of 1640. Another seventeenth-century bequest was that of Bishop Hacket in 1670. Next, in 1715 George I. presented to the University the valuable collection of the late John Moore, Bishop of Ely, rich in those early specimens of English printing of which such admirable facsimiles have recently been published by the University Press. No other accession seems to have found its way to the Library during the eighteenth century, and more than half the nineteenth passed without any striking increase of the collection. In 1870, however, Henry Bradshaw—perhaps the most notable bibli- ographer this country has produced, for it was he more than any man who transformed what was an art into what is a science—presented to the Library under his charge his col- lection of Irish books, to which, on his death in 1886, his 'executors added a second Irish collection, together with his valuable liturgical works. Most subsequent bequests and donations have left almost unaffected that portion of the Library catalogued in the present volumes. For instance, upwards of sixty thousand volumes, once in the possession of the late Lord Acton, are now in the University Library, but of these less than Way come within Mr. Sayle's pur- view. An exception is connected with the name of Mr. Samuel Sandars, through whose generosity many valuable accessions were made to the Library from 1870 onwards, and who on his death, which occurred soon after the present catalogue was begun in 1894, left to the University his own library, which included over four hundred early English books, together with a sum of £500 to be spent in acquiring others.

It is sad to think how the Library has suffered in past years from the carelessness of its guardians and the dishonesty of those enjoying the privilege of access.. Of the eight hundred and seventy-six books from the Holdsworth col- lection which should appear in this catalogue, only six hundred and six are now forthcoming. The most notable of the absentees is the unique folio Directorium Sacerdotunt, printed by Caxton, which was stolen about 1778, and is now in the British Museum. This work, by Clement Maydeston, superseded the Sarum. Ordinate or Pica, also sometimes called Directoriunt Sacerdotunt, the only printed edition of which, also by Caxton, is now represented by a few fragments rescued from a binding and now likewise at the Museum. Again, during the thirty-five years which elapsed before George I.'s gift was properly housed, it is known that large numbers of volumes were stolen, though the extent of the depredations remains undetermined.

It is significant of the difficulties of bibliographical work that the three years originally estimated as adequate for the preparation of the present catalogue irresistibly grew to twelve. Those who have ever embarked on similar under- takings will not be surprised at this, especially as by gift, bequest, and purchase the collection grew under the cataloguer's hand by something like a third of its bulk ; while for the rather irritating and very undesirable delay in the issue of the index volume the University librarian himself takes the responsibility, perhaps a little light-heartedly. Considering the character of the undertaking, the unavoidably experimental nature of many of the details of the scheme, the rearrangement of material sometimes necessitated by experience gained during progress of the work, and many other hindrances, it is to the greatest credit of Mr. Sayle and of all concerned that this invaluable catalogue is now at the service of students. We trust that the authorities of the sister University will before long be in a position to provide us with a similar guide to the far richer treasures in the library of Sir Thomas Bodley.