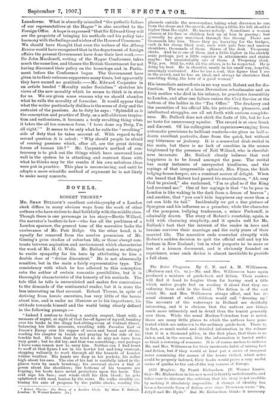 NO ROBERT THORNE.* MR. SHAN BULLOCK'S excellent autobiography of a

London clerk differs in many obvious ways from the work of other authors who have striven to deal faithfully with the middle class. Though there is one personage in his story—Bertie Willard, the narrator's brother-in-law—who has all the perkiness of a London sparrow, the general tone of the narrative lacks the exuberance of Mr. Pett Ridge. On the other hand, it is equally far removed froni the sombre pessimism of Mr. Gissing's grim studies of suburban life, or those abrupt con- trasts between aspiration and environment which characterise the work of Mr. H. G. Wells. Mr. Bullock makes no attempt to excite sympathy for his hero by attributing to him a double dose of "divine discontent." He is not abnormally sensitive, but in the main a fairly representative type. The consistency with which he has adhered to this conception robs the author of certain romantic possibilities, but it is thoroughly characteristic of the honesty of his methods. The tale tIlat he tells is unvarnished and makes few concessions to the demands of the sentimental reader, but it is none the lees interesting on that account. Robert Thorne, in spite of deriving from heroic ancestors, has very little of the heroic about him, and is under no illusions as to his importance, his attitude towards himself and the world being clearly defined in the following passage :—

"Indeed I confess to feeling a certain respect, bleat with a measure of regret, at sight of that far-off figure of myself, bending over his books in the dingy bed-sitting-room at Culvert Street, balancing his little accounts, wrestling with Paradise Lost or Bacon's Essays over his supper of cocoa and bread and cheese, reading his chapter in Isaiah and praying by the side of his truckle bed. His best that he tried to do may not have been very great ; but he did try, and that was something ; and perhaps I have some reason now to envy him. Neither can I find heart to scoff at that figure I see in his bowler hat and long overcoat, stepping valiantly to work through all the hazards of London winter weather. His hands are deep in his pockets, his collar high about his ears. The rim of his hat is carefully inked in the places worn by much brushing; his overcoat shows a tint of green about the shoulders ; the bottoms of his trousers are fraying; his boots have metal protectors upon the heels. Tho cold nips his face ; east winds chill his thin blood ; he gets splattered with mud, beaten by the rains. He walks steadily on, timing his rate of progress by the public clocks, reading the • Robert Thorne the Story of a London Clerk. By Slum F. Bullock. Loudon: T. Werner Laurie. ffiej placards outside the newsvendors, taking what diversion he can from the shops and the crowds, slouching a little, his left shoulder higher than the right. He knows nobody. Sometimes a woman glances at his face or children look up at him in passing ; but generally he goes unnoticed through the throng. There are thousands like him. There they go, hurrying for the bridges, each in his cheap black- coat, each with pale face and uneven shoulders ; thousands of them. Slaves of the desk. Twopenny clerks. And he is one of them, just a little higher in the clerkly scale perhaps, just a little superior in attainments aud status maybe but unmistakably one of them. A Twopenny clork. Why, yes. Still he, with all the others, is to be respected. He is doing his best. He is cheerful, manly in his small way, hopeful, amazingly contented. Also he has a soul, this figure that I see in the crowd, and he has an ideal, and always ho cherishes that ennobling thing, the love of a good woman."

His immediate antecedents in no way mark Robert out for dis- tinction. The son of a lame Devonshire schoolmaster and an Irish mother who died in his infancy, he gravitates irresistibly to London, and after one failure enters the Civil Service at the bottom of the ladder in the "Tax Office." The drudgery and the amenities of his official life, his privations, pleasures, and intellectual struggles, are all set forth with curious complete- ness. Mr. Bullock does not shirk the facts of life, but he has no taste for unnecessary squalor. The record is at once frank and discreet. Of his colleagues and superiors—ranging front automatic precisians to brilliant wastrels—he gives us half-a- dozen excellent portraits, done from the quick, but without any bitterness or jealousy. It is a somewhat drab recital in the main, but there is no lack of sunshine in the scenes brightened by the presence of Nell Willard, who is cheerful- ness incarnate. Mr. Bullock clearly believes that real happiness is to be found amongst the poor. The recital

has many instances of unexpected kindliness, and the sayings of that irrepressible optimist, Mrs. Flynn, the Irish

lodging-house-keeper, are a constant source of delight. When she heard that Robert bad passed his examination, "Alm, may God be praised," she exclaimed, "I'm as glad as if the King had crowned me." One of her sayings is that "to be poor in London is like waking in the dark from a dream of heaven" ; and another, that "you can't hide happiness any more than a cat can hide its tail." Incidentally we get a fine picture of Spurgeon and his influence as a preacher, while the character of the pompous, bullying tradesman, a minor Pecksniff, is admirably drawn. The story of Robert's courtship, again, is told with charming simplicity, and it speaks well for Mr. Bullock's tact that the interest of the reader in hero and heroine survives their marriage and the early years of their

married life. The narrative ends somewhat abruptly with Robert's sudden decision to quit the official mill and try his fortune in New Zealand ; but in what purports to be more or less of a human document, and is obviously founded on experience, some such device is almost inevitable to provide a full close.