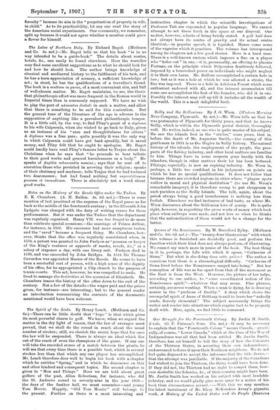 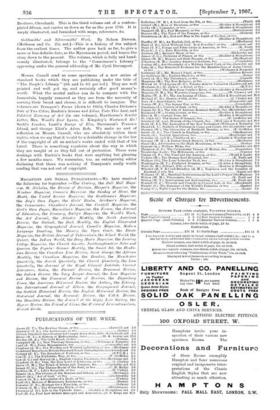 Our Struggle for the Fourteenth Colony. By Justin H. Smith.

2 vols. (G. P. Putuam's Sons. 25s. net.)—It may be necessary to explain that the "Fourteenth Colony" means Canada,—practi- cally, of course, "Lower Canada," which at the time of the War of Independence was all that had been settled. Mr. Justin Smith, therefore, has set himself to tell the story of how the Colonists of the Thirteen States, in asserting their own independence, endeavoured to force it upon their Northern neighbour. We do not feel quite disposed to accept the iuference that the title draws,— that the attempt was justifiable. If the majority of the Canadians had wished to join the Thirteen, the thing would have been done. If they did not, the Thirteen had no right to compel them, how- ever desirable the fisheries, &c., of their country might have been. Mr. Justin Smith has worked on his subject with most laudable industry, and we would gladly give more space to a notice of his book than circumstances permit.—With this we may mention the latest instalment of Mr. Elroy McKendree Avery's gigantic work, A History of the United States and its People (Burrows

Brothers, Cleveland). This is the third volume out of a contem- plated fifteen, mid carries us down as far as the year 1745. It is amply illustrated, and furnished with maps, references, 8:c.